Headlines
You are at:Home»Departments»Mansion House 1757

George Keeney has two affirmations he says every morning and every night.

First, he asks St. George to help all those in need. Then he asks that his family’s new endeavor, Mansion House 1757, be a positive influence on the community. By all accounts, it sounds like his prayers for the Fairfield restaurant and inn are being answered—and reciprocated—with a warm community welcome.

The biggest house along Fairfield’s Main Street was known as Mansion House for many years following its construction—by Patrick Henry’s uncle—in 1757. Its colonial façade looks like a postcard for small town Americana—appropriate, given the historical guests like Thaddeus Stevens and Mamie and Ike Eisenhower who have passed through its doors. Sometime during the 1970s its name changed to the Fairfield Inn. 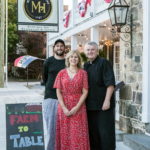 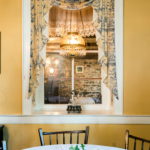 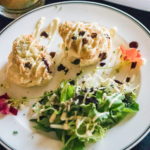 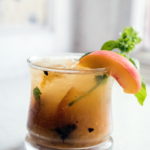 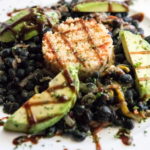 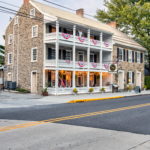 Cindy and George Keeney toured the historic inn and restaurant, up for sale, earlier this year and spied an historic framed photo labeled “Mansion House.” Not only did they fall in love with the property, but they also loved its original name. They settled on the property in May, had a soft opening in late June, and officially opened on July 1.

“George has worked so hard for other people … for 40 years,” says Cindy. “I wanted him to do this for our family—I have always believed in him. For a few years, Dan was saying, ‘Come on, Pop, let’s open a place.’ Dan knew if he had George in the kitchen, they would be a success together.”

The Keeney chefs put Mansion House’s menu together with a straightforward approach, led by George’s years of experience at regional restaurants and his training at the Culinary Institute
of America.

“It’s not pretentious. The menu is based on good, solid, classic preparations using the freshest, best ingredients we can get,” George explains.

Classic dishes are blended with creative twists and turns. We sampled the Antipasto Plate of appetizers featuring a creative Baked Ricotta Blackberry-Ginger Souffle right in the center. The inventive egg roll appetizer is actually a Crab Imperial Egg Roll with a tasty Carolina Slaw and Asian Hoisin Sauce. Another delicious way to whet your appetite? Try the Chicken Fried Oyster Slider on a Biscuit with Dijonnaise.

Crab cakes are shining stars on the dinner menu. The secret recipe is one that George picked up early in his career from Chef Jerry Jackson at the former Cockey’s Tavern in Westminster, Md., and they’re found on Mansion House’s fine dining menu and tavern menu.

“Squire Miller’s Tavern menu is proof that diners can enjoy a very approachable and affordable meal for roughly the same cost as a fast-food dinner,” George says.

In addition to the restaurant and tavern, Mansion House 1757 includes a boutique inn with six rooms and suites upstairs, featuring antique furnishings and exposed stone walls.

Dan describes the chance to work with his dad in one simple word: “Lucky.”

“It transformed from something I did to make money to something I enjoy,” says Dan. “I started by washing dishes, moved up to prep, worked my way up through the kitchens at The Blue & Gray Bar & Grill [and]The Links, and I also spent four years in the Air Force. I’ve done roofing, framing houses, but I always circled back to the kitchen. And now I can’t see myself doing anything else.”

Although the Keeneys acknowledge that 2020 has been a crazy year to launch a restaurant, they describe an outpouring of community support and surprising “up” sides to the pandemic.

“Cindy and I are stupid positive,” says George. “We look at it as an opportunity, like an extended soft opening, and it’s allowing us to continue to ramp up.”

Perhaps the couple’s fate as restauranteurs was sealed when they first met during their college years. They both worked at the restaurant at Gettysburg’s Holiday Inn—Cindy as a waitress, George as a cook. Today, they’ve been married nearly 35 years.

Back in the kitchen, George is passing the family torch. As he works alongside Dan, a framed photo of George’s Slovak grandmother watches over them. She was also a cook—at the state’s school for game commissioners.

“The long term goal is for Dan to take over down the road, and we’ll retire,” Cindy said. “We’re building something together.”