Headlines
You are at:Home»Departments»A Dose of the Church of Satire

Laughter is the best medicine, they say, and there’s even science to back it up. Laughter can decrease stress hormones and increase immune cells and infection-fighting antibodies that improve one’s resistance to disease.

And, given the last couple of years, a trip to the Church of Satire may just be what the doctor ordered.

The 50-seat comedy club in downtown Hanover was established in 2018 by owner and comedian Jim Bryan. And, yes, this “church” even has pews purchased from his family’s church. 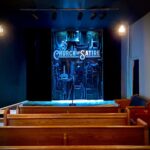 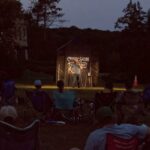 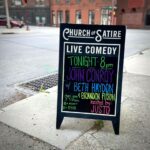 Bryan, who grew up in Long Island, New York, has long been drawn to comedy. In fact, he was performing stand-up comedy in Las Vegas when he met his future wife, who hailed from Hanover. The couple, who now have five children, relocated to Hanover because they didn’t want to raise their family in Las Vegas, he says.

With a growing family, Bryan focused on a successful career as an executive in the health industry. “I was running my own retirement community, 240 beds, 300-something staff, 15 department heads,” he says.

But Bryan remained a comedian at heart. And his own body was telling him just that. “I got sick,” he says of stomach issues and a significant weight loss. “How long was I not going to do what I believed I was intended to do?”

With the support of his wife, he took the plunge. “For her to say, ‘Let’s do this,’ well, it was the final confirmation and validation that I required,” says Bryan.

When he first moved to Hanover in 2007, Bryan had wondered where the comedy was, he recalls. He opened the Church of Satire, which quickly took off. Shows would sell out, as Bryan, who also performs at the club, was bringing in comedians who had been featured on HBO or Comedy Central.

“We were steamrolling,” says Bryan.

“It was like a traveling circus for a couple of months,” remembers Bryan with a chuckle.

Now the doors at the Church of Satire are open again, having weathered the COVID storm. And those such as Tom Hufnagle III, owner of the Circle and Hanover Hotel, are glad of it.

“What Jim is doing with the Church of Satire is super important for our community and for our downtown,” says Hufnagle. “It’s one more amazing option that we have in Hanover. It has its place here, and I hope it stays here for a long time.”

The comedy club is supportive of its fellow area businesses, such as those owned by Hufnagle, as well. Food and drink are not served at the club, but patrons may bring their own alcohol or order in food, which is delivered from local restaurants.

As for the comedians who perform there? “It takes a little bit of a leap of faith for some comedians to come to a place like this,” says Bryan. “But when they come here, more often than not, they are pleasantly surprised by the ability for the people of Hanover to get the joke.”

Comedians like Peter Wong. A comedian from New York City whose YouTube channel has 4 million views, Wong admits initially he had his doubts about coming to the comedy club. “I remember seeing miles of farmland,”
he says of his first visit. “I was really kind of scared. I am thinking, ‘Are they really going to get my stuff?’”

But he shouldn’t have worried. “Right off the bat were no problems,” he says. So much so that he has returned to the club and even headlined there.

And the locals haven’t been the only ones to appreciate his humor. One fan drove several hours to Hanover just to see Wong perform live. “Unbelievable,” says Wong.

Sure, there are plenty of comedy acts easily accessible online. But there’s just something about a live comedy show, whether it is performed in New York City or downtown Hanover. “I think comedy is best when it’s done in person,” says Tobin Miller, a New York City comedian who has performed at the comedy club and was recently named one of New York’s comics to watch. “’It’s nice to have the option of going to see live stand-up comedy. Because that’s the real thing, right? Like the Church of Satire.”

And that opportunity to perform is open to all—at least on Monday nights. The Open Mic Nitro event offers the opportunity for those who want to try out their comedic chops in front of an audience to do so.

“We’ve had so many first-time people sign up since we’ve been doing this the last four or five months,” says Bryan. “It’s really been amazing. I think people are coming out of the pandemic wanting to do crazy things with their lives now, you know?”

And getting a good dose of laughter in the process.

For more information about the Church of Satire and upcoming shows, visit www.churchofsatirecomedyclub.com