Headlines
You are at:Home»Departments»Artisan»The ‘Picasso’ of Tires

Most people look at old, used tires and see, well … old, used tires. Not Noah Russell. The 21-year-old artist sees a lion with a flowing mane, a fire-breathing dragon, and even a coral reef complete with a variety of sea life.

What began as an idea for a parade float has now become an artistic passion for Russell, who has a Facebook page and YouTube clips demonstrating how he creates his tire sculptures. 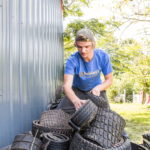 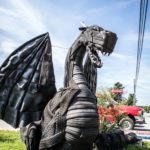 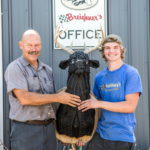 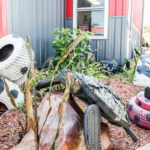 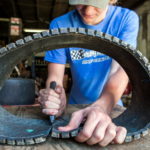 “Old tires were something I had an abundance of,” says Russell, who works at Breighner’s Tire Center in Littlestown.  So he decided to put them to good use.

Russell discovered his talent for tire sculpting when his employer and longtime family friend, Randy Breighner, asked if he would be interested in creating something for the town’s Good Ole Days Parade. Russell, who admits liking a good challenge, stepped up to this one and set his sights on creating a lion.

“He has a pretty healthy imagination, and I figured he could do it,” says Breighner.  But he gave Russell an ultimatum. “I told him if it didn’t look like a lion in three weeks, we wouldn’t enter it in the parade,” he remembers.

It did and they did—and the lion won first place.

Not that the process didn’t have its challenges, admits Russell.

“That first day I was like ‘I don’t know if I’m going to be able to do this,’” he says. “I thought it would be putting some two by fours together and that it would be pretty easy.”

It wasn’t. But Russell remained committed.

“I went home and reevaluated,” he recalls. “I figured out every angle that needed to be cut, the measurements, how long the piece had to be. It was a learning process.”

Next year for the parade, Russell upped the ante. He created a towering eight-foot-tall fire-breathing dragon.  “The dragon took over 100 hours and was more involved because of the sheer size of it,” says Russell. “And it breathes fire. I spent probably two weeks trying to get that to work.”

With the lion, Russell had used car tires, which have a steel belt in them. “The steel belt is incredibly difficult to cut,” he explains. “You have to use a reciprocating saw.”

For the dragon, he took a different approach. “I used lawn and garden and trailer tires,” he says. “They have nylon cords in them so you can just cut them with an X-Acto knife. Much easier to manipulate and easier to shape. I could just use a hand knife, take the tire, lay it on a piece of wood, and just slice it.”

Different tires can also provide different textures, say, scales for a dragon. “I used turf tires,” says Russell. “There’s basically two types of turf tires. There are ones that are almost like knobby. You look at the dragon, and the tire tread I used for him looks like scales because of the type it is, knobby.”

The breathing fire part was the result of a motor that pushed on a can of butane, sending it through a long brake line, according to Russell. The gas was then ignited by a coal heated by remote control to make the dragon breathe fire.

Russell again won first place in the parade. In fact, the dragon was included in Halloween parades in Gettysburg and Hanover, and both the lion and dragon have been displayed at Round Top Campground.

With the spirit of Halloween in mind, this year’s sculpture was the Headless Horseman, complete with the horse and the rider cradling a jack-o’-lantern head. And Russell once more was looking forward to the Good Ole Days Parade and going three for three.  “We would have won this year,” says Russell.

Then the pandemic happened, cancelling the parade. But the Headless Horseman was still displayed along with the lion and dragon in a place of honor in front of the tire shop.  And the sculptures began to serve another purpose.

“During COVID-19, when everyone was home, every day one or two cars at least would bring their kids out to take pictures,” says Breighner.

Among his works, Russell says that the Headless Horseman is his favorite, despite the challenges of creating a human form for the first time. “I spent a lot of time scratching my head on that one,” he says. “I spent more time thinking than I probably did doing. I was trying to make it look like a person. I’d never done that. Animal symmetry, easy peasy. A person is a little more challenging. I definitely like the results of it, but it was the most challenging.”

Russell, who drew as a child and considers himself a “decent” artist, also enjoys spray paint art and even tried his hand at chainsaw art. “I spent two days trying to make a squirrel out of a log,” he says. “It ended up going into the ditch by the house. Chainsaws are not forgiving.”

So he is sticking to tires. “Every one has gotten easier because I’ve learned what to do,” says Russell of his tire sculptures, which also include a dog sculpture he created and then donated to the Littlestown Fire Department.

For his next project, he is creating a coral reef from old oil drums. “The coral reefs are dying, and pollution is a huge problem,” he says. “How ironic to make a coral reef from oil drums? I like using recycled materials. People tell me ‘it’s awesome that you are using old tires that would just end up in a landfill. You know you are doing something good for the environment.’”

The coral reef will be alive with color and will include a sea turtle, a stingray, fish, and an octopus.

“All the coral is going to be made out of recycled materials,” Russell says. “We have valve stems with brass in them. I’m going to melt down all the brass. You can get a bunch of different coral colors just from pure metal. Coppers give you red, brass gives you an orange/gold color, stainless steel gives you a silver, and if you heat up stainless steel, it turns blue.”

Having found his niche with tire art, Russell is looking forward to the challenges to come.“I’d like to wake up and be a Picasso, but even Picasso didn’t wake up being a Picasso,” he says. “I mean, you’ve just got to keep creating. The more you do it, the better it gets.”