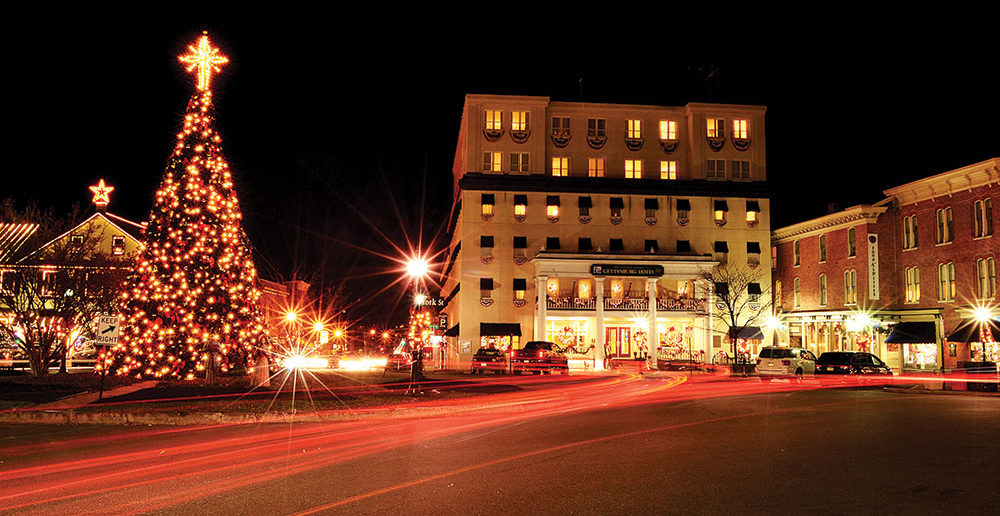 There are no better sights and sounds than on Lincoln Square at Christmastime. (Photo courtesy of Destination Gettysburg)
Feature Article

The Heart of the Holidays

By Karen Hendricks on November 1, 2015 0 Comments
There are no better sights and sounds than on Lincoln Square at Christmastime. (Photo courtesy of Destination Gettysburg)

Ask anyone about their favorite holiday tradition and you will receive a multitude of answers—everything from Christmas trees, to music and carols, the hustle and bustle of shopping, decorating, and celebrating the “true” meaning of Christmas through Christ’s birth. The one place in Adams County where you can experience every single one of these traditions—and more—is located in the heart of Gettysburg, at Lincoln Square.

Anticipation for the holiday season builds, as Gettysburg Borough workers construct the town’s Christmas tree around Lincoln Square’s flagpole every year in mid November. The greenery, however, isn’t lit until early December—the 5th this year—at the conclusion of the Annual Old Getty Place Christmas Parade. Then the stage is truly set for Gettysburg’s unique downtown celebrations to follow—a charming Christmas shopping destination; the Annual Gettysburg Tuba Carol Fest; holiday entertainment at the Majestic Theater including the classic “A Christmas Carol;” and the crown jewel of Gettysburg’s holiday celebrations—the spectacular New Year’s Eve celebration complete with fireworks above Lincoln Square. 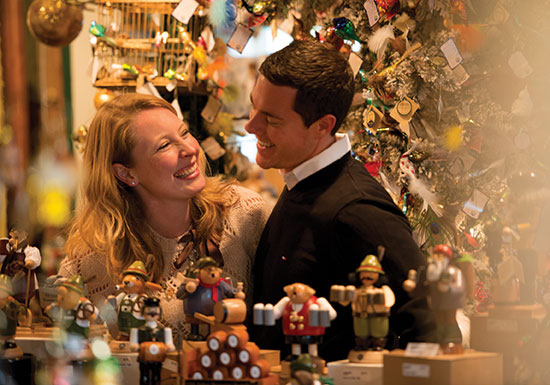 Whether you’re shopping for a loved one or a coworker, the shops on Lincoln Square have something special for everyone, including unique, handmade items. At Lark, you can pick up vintage artwork, jewelry, and other one-of-a-kind gifts. (Photo courtesy of Destination Gettysburg)

“Lincoln Square is so beautiful over the holidays,” says Timbrel Wallace, owner of Lark, located at 17 Lincoln Square. The popular gift shop relocated to the square from Baltimore Street over the summer.

“This location is more of a destination. Visitors can shop, grab a bite to eat at the bakery [Gettysburg Baking Company], watch the activity on Lincoln Square—maybe even watch the snow fall—it’s all very picturesque. I feel so fortunate to be in this location in the middle of the hustle and bustle of Gettysburg’s holiday events,” says Wallace.

One of Wallace’s “neighbors” is Gettysburg Baking Company’s Marc Jalbert, who predicts the busiest point of his entire year will be Thanksgiving. The European-style bakery carries fresh breads, pastries, and themed food baskets for holiday gift-giving.

Wallace is stocking up on handmade, affordable gifts for the holiday season. “I’m buying more and more from Etsy sellers—directly from the makers,” Wallace says. “People really appreciate one-of-a-kind items…If they know they’re handmade and there’s a backstory—a connection to the maker—there’s an increased value.”

“The Most Beautiful Christmas Music One Might Ever Hear”

One of Gettysburg’s signature holiday events is the Annual Tuba Carol Fest, celebrating its 20th anniversary this year. Always held the second Friday in December on Lincoln Square, this year’s event is set for Dec. 11 at 7 p.m.

Musicians of all ages and talents are welcome to participate, using a readily-available carol book, meeting for a rehearsal the hour before the event, then taking “the stage” on Gettysburg Hotel’s front porch.

Jones describes the scene: “The hotel provides a beautiful backdrop, decorated for Christmas with lights and wreaths…That quadrant of the square is packed with people listening and singing. Everybody knows the music—traditional carols like ‘O Come All Ye Faithful,’ ‘Hark the Herald Angels Sing,’ and ‘Silent Night.’ The tuba sounds are so mellow—it’s a gorgeous sound.”

Instruments include others in the same family—euphonium, baritone, and sousaphone—with musicians ranging in age from fifth graders to those in their 80s. Jones says there are new participants every year, with about half of the musicians returning year after year to toot their horns.

Musicians hail from Adams, York, Cumberland and Dauphin counties, plus Maryland, Virginia, and New Jersey. Jones says part of the fun is meeting the other musicians an hour before the performance—which can be quite a surprise. A brass player with the Canadian Mounted Police Band showed up a few years ago, as well as a musician from Florida. Event partners include the Adams County Arts Council and Destination Gettysburg, which provides hot chocolate to attendees.

“It’s 30 minutes of the most beautiful Christmas music one might ever hear…everyone is happy,” Jones says of attendees. But perhaps the musicians are happiest of all. “Tuba players are special people—they don’t always get a lot of recognition. But the Gettysburg Tuba Carol Fest gives them the chance to be the focal point—and [finally]play the melody!”

“Celebrating the True Meaning of Christmas” 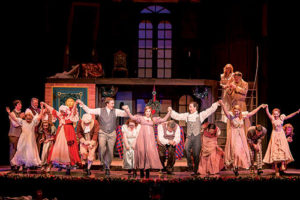 A new, but classic event, coming to Gettysburg this season is “A Christmas Carol,” the theatrical production based on the traditional Charles Dickens tale, produced by Totem Pole Playhouse at Gettysburg’s Majestic Theater in collaboration with Gettysburg Community Theater.

The story of Ebenezer Scrooge was originally produced at Totem Pole Playhouse from 1987-2004, then resurrected last year at Chambersburg’s Capitol Theatre. Beginning this season, the show has committed to a four-year holiday season run at the Majestic, just off the square at 25 Carlisle St.

“This year we went back to the original text, using a lot of it verbatim,” says Rowan Joseph, producing artistic director at Totem Pole. “The original book has strong Christian references, including Christian charity and the role of Christ’s teachings. In fact, the show opens with a prayer.”

Joseph says it’s the perfect holiday event for anyone who enjoys “celebrating the true meaning of Christmas,” especially families. “There’s so much commercialization of Christmas, but this is the antidote to that…No matter how many times you see it, it’s worthwhile.”

Paris Peet, a Shippensburg University theater professor, will be reprising his role as Scrooge, but Joseph says many community members, including Gettysburg College students, will round out the cast list.

The show will run from Dec. 10-20 with tickets priced at $30-$36. All attendees will receive three “Scrooge dollars,” redeemable for discounts at dozens of area restaurants and shops. Joseph says since the show is embarking on a four-year run, he looks forward to partnering with area merchants and residents to ensure the entire community benefits annually.

“Spirits are High and Everyone is Hopeful” 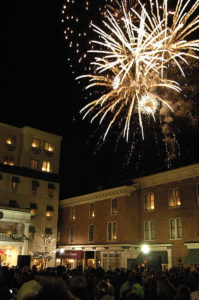 The grand finale to Gettysburg’s holiday season attracts about 2,000 people to Lincoln Square on New Year’s Eve. Organizer and Executive Director of the Adams County Arts Council (ACAC) Chris Glatfelter says the key to Gettysburg’s New Year’s Eve Celebration is its appeal to people of all ages and the community partnerships it produces. Gettysburg Borough, ACNB Bank, and the Majestic Theater are just some of the collaborators.

ACAC is mainly responsible for entertainment, including a DJ on the square starting at 9 p.m., followed by a live music stage from 9:30-11:30 p.m., free arts activities at ACAC’s Arts Education Center, a free family movie at the Majestic, performances and entertainment at Christ Lutheran Church, then a countdown to a midnight program led by Mayor William Troxell at 11:30 p.m., culminating in fireworks lighting the midnight sky above Lincoln Square, sponsored by ACNB Bank.

“The ACAC is involved because of the arts…When you can add an arts element to a program or event, you make it better,” Glatfelter says. “The music adds to the downtown atmosphere, a balloon artist fascinates the kids…It’s important for us to be in the public eye stressing the value of the arts.”

Glatfelter adds, “The thing with New Year’s Eve that always strikes me—I’ve seen close to 2,000 people of all ages, enjoying themselves, dancing, shivering together…but spirits are high and everyone is hopeful for a new year and what will come.”