Headlines
You are at:Home»Departments»A Sweeet! Calling

Bringing Sugary Joy to Gettysburg for the Last Decade

Sweeet! The Candy Store was calling to the young girl, and she just couldn’t resist.

“My daughter wanted to go there once, and I was trying not to stop,” says Candy Nies of her then-12-year-old daughter. “We caught the red light out front, and she hopped out and ran into the store.”

But that first visit wasn’t the last.
“We usually stop every time we are in town,” Nies admits.

Sweeet! can have that effect on people.

Established in 2012 by Mark and Cindy Fox at 100 Baltimore St. in downtown Gettysburg, the shop offers candies galore, including retro favorites and international brands, as well as a wide variety of sodas and even toys and curiosities.

A recent visit at the height of tourist season finds the store, with its comforting and cozy old-timey atmosphere, bustling as visitors peruse items such as the world’s largest jawbreakers, candy cigarettes, Icelandic chocolates, Flake candy bars and Smarties from England, and more varieties of saltwater taffy than one can imagine—from golden pear to pickle. The store has 4,000 items of candy alone. 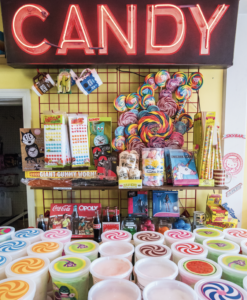 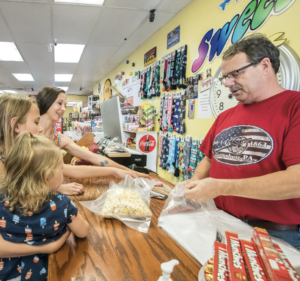 And, according to Cindy, if someone is looking for something specific, the shop will make an effort to get it in stock. For instance, a request from a transplant from Scotland resulted in Irn-Bru, a Scottish carbonated soft drink, being made available at the shop.

“You can’t find most of what they have anywhere else,” says customer Bob Fissel.

“A trip downtown was never complete without a stop at Sweeet!,” she says. “We both enjoyed the old-time candy we remembered from our childhood.”

Mark and Cindy decided to relocate to Gettysburg from Arizona to be closer to Cindy’s parents. And, in doing so, they wanted to start a business. Candy seemed a natural choice. After all, Sweeet! wouldn’t be Mark’s first foray into this business; he used to sell candy as a youngster.

“I would buy a whole big pack of Twizzlers and get on the school bus and sell a string of it for five cents,” he says. “By the end of the week, I was up a buck and a quarter. The kids loved me because as soon as I got on the bus, I would get mobbed. They had a nickel, and they wanted that piece of Twizzlers.”

Sweeet! has resonated with customers.

“The first month we opened, somebody came running in and said, “‘I found you! I’m so happy!’” says Cindy. “He was from England and had a friend who had visited and went back to England and told him how great we were. We get people from all over the world, and it’s so cool.”

LeeAnn Lenhart, for example, now makes her home in Gettysburg but grew up in South Africa. An acrobatic gymnastics instructor, Lenhart was hunting for treats for her students when she came upon Sweeet! and discovered so much more.

“In South Africa, the chocolate you get has more of a cocoa taste,” she says. “It is just a richer, deeper flavor and not just sweet.”

Lenhart purchased goodies from her homeland that day. “I walked out with more candy for me than I did for my team,” she says. And she still returns. “But I have to watch my budget,” she says with a smile.

Of all the treats, what does Sweeet! sell the most?

“I think people are drawn to the taboo of it,” adds Mark.

Dori Lawson, on the other hand, used them as a teaching tool and an incentive. A retired nurse practitioner specializing in cardiology, Lawson would buy “cartons and cartons” of the candy cigarettes. “I handed them out to my smoking patients and told them that these were the only cigarettes they were permitted to have,” she says.

It was an opportunity to encourage patients to make healthier choices while not being too heavy handed in the process, says Lawson. “Lots of my patients remembered them as kids,” she says.

Peculiar Pop and Other Novelties

While candy is king, don’t overlook the sodas at Sweeet!. Many customers are as drawn to the designs on the outside of the soda bottle as much as what is on the inside. With more than 500 types of soda to choose from, the selection varies from peanut butter and jelly or ranch dressing flavors to Leninade, with its image of the former Russian leader on the bottle. “Our customers say it is quite good,” says Cindy of Leninade.

Other soda bottles feature images of Marilyn Monroe, The Monkees, and John Wayne, among countless others.

Candy and soda aside, fun items such as rubber ducks, rubber chickens, and old-school lunch boxes are also for sale. “We have a little something for everyone,” says Cindy of the candy, soda pop, and toys.

Customer Pat Parks says the shop is a favorite of her granddaughter’s. “She is 8 and says she’s going to get a summer job there,” says Parks, of Gettyburg. “She’s into bubblegum right now.”

It seems as though the shop is passing the torch of sugar and joy from one generation to the next.

“Being at Sweeet! may not bring back memories for the kids like it does for us adults,” says customer Lisa Shower, “but perhaps it might instill some memories of their own.”

Lisa Gregory is a compassionate and creative writer extraordinaire who became a part of the CG family a few years ago. Her articles have appeared in publications nationally and internationally. She is also a published author of fiction with short stories in the books “For the Love of Gettysburg” and “On Hallowed Ground.” She lives in Taneytown, Md., with her husband and on the weekends, you can find her on tour with her son’s rock band, Ignite the Fire. “It has been an amazing experience and exposed me as a woman in her 50s to a very different world,” remarks Lisa of her experience with the band.