Headlines
You are at:Home»Departments»Artisan»A Stitch in Time

Quilting—a timeless, classic art form—involves fabric, stitches, and all the pieces coming together to form a beautiful pattern. There’s a great deal of care, time, skill, even love, stitched into every quilting project. Putting together all those colorful pieces also seems to bring peace.

Back in 1997, a group of Adams County women came together to form a quilt guild. Today, not only is the group still meeting—but it’s flourishing, stronger than ever. Just like quilting itself, the Stitch N Peace Quilt Guild is sewn into the very fabric of these dedicated women’s lives, 25 years later.

It all started with a newspaper ad placed byAnn Holte, then-owner of the Gettysburg Quilting Center, inviting anyone interested in forming a quilt group to attend an organizational meeting. 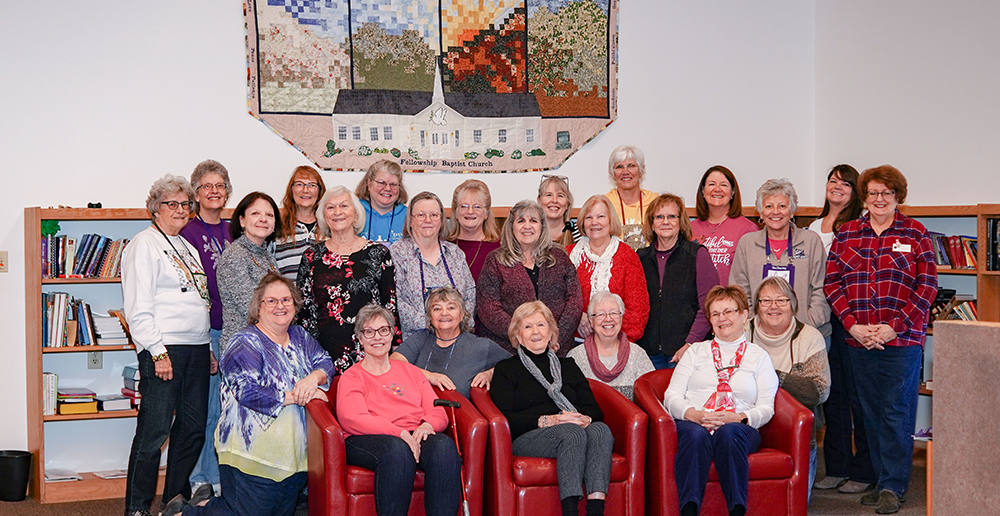 Janet Hartman’s mother saw that ad, and the mother-daughter pair attended. Janet, it turns out, offered a suggestion that day that formed the group’s identity.

“I suggested the name ‘Stitch N Piece,’ and someone else suggested we spell it ‘Peace’ and it stuck,” says Hartman. “And I’m really proud of that fact.”

Today, at age 80, Hartman, of Cashtown, is one of two remaining charter members. Her involvement, since the very beginning, means that she’s seen the group gradually grow through the years—and the need to find larger meeting spaces to accommodate its monthly gatherings.

Those gatherings are nearly full days of activities. Members enjoy a quilting class or demonstration in the morning—always learning and adding to their skills—followed by lunch and a business meeting. Excitement builds for the grand finale: show and tell. One at a time, members proudly show off their latest stitching projects, explaining their techniques. Sometimes they ask for advice on how to finish a project or overcome challenges. And they also share a glimpse into their lives.

“People tell stories about why they’ve made their quilts, often as a tribute to people they’ve lost,” says member Laurie Donaldson. “They share stories their grandmothers told them; they talk about the therapy creating the quilt brought them. When you hear those stories, it’s inspirational.”

After show and tell concludes, the group disbands on those positive notes of encouragement and inspiration—until the next month.

From beginners to experts, members hail from all over Adams County and all walks of life, spanning ages 40 to 87.

Hartman, a longtime bookkeeper at downtown Gettysburg law firm Campbell & White, began quilting in her 30s—which means she’s been quilting for 50 years. Many—like Hartman and Donaldson—began quilting with their mothers.

“My mom taught me to sew from the time I was little,” recalls Donaldson, of Gettysburg. “We discovered quilting in the early ’80s after going to a large quilt show in Lancaster, and we both got the quilting bug right away. It was a very natural progression from sewing into quilting.” They joined Stitch N Peace in 2006.

Many different techniques and projects exist within quilting. In addition to traditional quilting, Donaldson enjoys paper piecing (a quilting method based upon a design first created on paper)
as well as applique (sewing fabric shapes together) and miniature quilts. Over the years, she estimates she’s completed hundreds of quilting projects, from small mug rugs all the way up to full-size quilts.

“It’s the whole creative process—I get energy from that process, and it makes me excited. I probably talk about quilting too much for some people,” Donaldson says with a laugh. “But I love puzzles, and quilting is like a puzzle.”

Every quilter also has what are called UFOs. “Most of us have many unfinished projects—we call them UFOs,” Donaldson admits with a smile.

“While I did sew at an early age, I never dreamed of quilting until 2003, when my daughter got married,” Todd explains. “We went to an auction together and picked up a double wedding ring quilt that was partially completed. Why I picked it up, I’ll never know, but I gave it to my sister who quilted, and she taught me how to hand quilt.”’

Todd, who managed an inside sales group at a dental supply company at the time (and continues as a part-time consultant today), found quilting to be a peaceful counterpoint to her career.

“I found hand quilting so therapeutic, so relaxing, and my job was very stressful. I just thought quilting was the most relaxing thing I’d ever done. Four years later, when my daughter was pregnant, I made my first quilt in 2007, and I was hooked,” Todd says.

Amid the pandemic, the group only missed a few months of meetings, but they stayed close. Members shared photos of their work-from-home projects, incorporated into a Flickr program.

“I think people have a bigger need now, more than ever, to connect,” Todd says. “And what better way to do that than with a skill, a talent, a hobby that you love—and to put yourself around other people who love that same thing.”

Throughout 2022, Stitch N Peace will be celebrating the guild’s 25th anniversary.

During the year, members will take turns leading monthly morning sessions based upon the theme “Quilting Around the World,” by sharing quilting patterns, projects and techniques from other cultures—including Celtic quilting and Italian Trapunto quilting.

“We also do challenges in the guild every year, so this year we have special challenges geared towards the 25th anniversary on the theme of ‘Make It New,’” Donaldson says.

“I actually found magazines from 1997, and those are going to be the inspiration—take a project, change it in some way, and make it new.”

“We set up a booth, we were quilting, and I was stunned at the number of people who stopped,” says Todd. “We had a steady stream of people; we were so thrilled.”

One of Stitch N Peace’s longtime public appearances is at Pippenfest, Fairfield’s annual apple festival. The group sets up a quilt show, which people can enjoy free of charge, and even vote for their favorite quilt, which determines the viewer’s choice award.

“Outreach has always been a big part of the guild,” Donaldson says. “It gives us a sense of purpose, and it’s nice to make a difference. When you receive a homemade gift, it means a lot—somebody took the time to cut it out and sew it together.”

The list of community outreach, and lives touched, is long: placemats for Meals on Wheels, walker caddies for nursing home residents, pretty pockets with long strings for breast cancer patients’ post-op drains, quilts for NICU babies, pillowcases for children at Hoffman Homes for Youth, pillowcases for children of incarcerated parents, and numerous quilts donated over the years. Last year, for Gettysburg Hospital’s 100th anniversary, the group made baby blankets for the first baby boy and girl, as well as the 100th baby born.

Hartman, the charter member, reflects on the past 25 years. “Whenever I think of the group, there are so many ladies who are so sincere and want to learn. That, to me, meant so much,” Hartman explains. “I love teaching, to help other people and see the smiles on their faces when they complete something or learn something—that has meant the most to me.”

“We hope we’re enriching the community,” says Todd. “The quilting community is generally a giving community. We thoroughly enjoy what we do—the process of quilting— but we also enjoy giving. It’s about the joy of giving.”

“Some quilting friendships have become really close bonds, like a sisterhood,” Donaldson says. “We are all connected.”

Adding to the Quilt

The group doesn’t have a website. Old-fashioned word-of-mouth is how the group has attracted its following. New members are always welcome. Contact Cindy Todd via email for more information at [email protected].

2000 – When the Gettysburg Quilting Center closed, part of the group continued to meet regularly at the Adams County Library in Gettysburg, led by Janet Hartman.

2001 – The group, comprised of about 15 members, relocated to the Needle and Thread Fabric Store on Fairfield Road, added officers and formed committees.

January 2012 – Stitch N Peace grew to about 30 members and relocated to a larger space, the Fellowship Hall of the Lutheran Home Community (now known at SpiriTrust Lutheran) on Old Harrisburg Road. “When we outgrew Needle and Thread, that was such a sweet moment, that there were that many people interested,” recalls Hartman, who’s been involved since the very beginning.

June 2020 – Following the pandemic closure of SpiriTrust to outside groups, Stitch N Peace relocated to the Fellowship Baptist Church in Fairfield, where it continues to meet monthly.

2022 – Stitch N Peace, now with more than 75 members, is celebrating its 25th anniversary.

What are quilt guild members’ most treasured, special quilts stitched over the years?

“I’m most proud of a quilt I made for my daughter and her husband, a queen-size quilt, where every block is different, done in blues and browns,” Laurie Donaldson describes. “It took a year-and-a-half. Another friend from the guild quilted it together with the batting.”

Years ago, Janet Hartman made a small throw that was big on meaning for her mother. “It has one-inch blocks throughout, and in the middle I put my mother’s name, my father’s name, when they were born, and then five blocks—for myself and my four siblings. My mother would go to that throw when she wanted to find someone’s birthday.”