Headlines
You are at:Home»Departments»Hidden Gem

Renfrew Museum and Park Sparkles with History, Nature, and More

On a bright September day, under a completely blue sky, excited chatter from a group of women floated across the lawn at Renfrew Museum and Park. It was still summer, but the golden hues of fall, including neighboring cornfields, infused the green agricultural landscape.

Comments such as “this is a hidden gem” and “it’s like we discovered a secret” came from the group as they completed a tour on the 107-acre Franklin County property.

“We hear comments like that all the time,” says Becky LaBarre, Renfrew’s executive director. “Renfrew is a representation of life in south central Pennsylvania that you can’t get anywhere else.”

Walk Back in Time

Indeed, the tagline promoting the Waynesboro property is “walk back in time.” Located about 20 miles southwest of Gettysburg, just a few miles from the Mason-Dixon Line along the Little Antietam Creek, Renfrew is owned by the Borough of Waynesboro, operated by a nonprofit arm, and on the National Register of Historic Places.

Visitors typically begin their visit at a large white and green circa-early 1900s horse barn that’s been converted into a visitor center. Stepping onto the property and touring the grounds—including numerous nature trails and picnic areas—is free and open to the public, as is the visitor center.

The property’s Federal-style centerpiece, the 1812 limestone-constructed Royer Farmstead House and its carefully curated collection of historic furnishings and artifacts, is open to tour-goers for a nominal fee ($6 for adults; $5 for seniors; $4 for students). The Pennsylvania German Daniel Royer family, including 10 children, operated a tannery, grist mill, lime kiln, and farmstead there 200 years ago. At that time, James Madison was president, and Waynesboro was actually known as Waynesburg.

The first of 10 rooms, the kitchen is dominated by its large hearth—remember, the family had to cook enough food for 10 children along with plenty of farmhands. Cupboards pay homage to one of the region’s preeminent redware pottery artisans, John Bell. In fact, Renfrew’s collection, featuring more than 150 pieces, is considered the largest of its kind in the country. 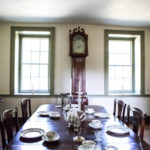 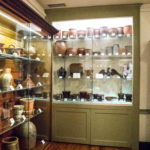 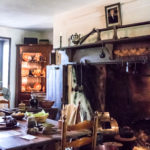 Renfrew’s home is the sixth historic home where LaBarre has served as a historic preservation professional. She was hired in May after serving as the Borough of Gettysburg’s director of planning and historic preservation for two and a half years. Prior to that, she worked for Chicago’s Glessner House and Clarke House museums, as well as the Henry Ford Museum’s Greenfield Village near her native Detroit.

“I have a lifelong love of history,” says LaBarre, 35, who lives in Fairfield with her husband. “Here at Renfrew, I look forward to introducing living history, people in period clothing engaging with folks and making relevant connections between our past and present, which makes our experience more interactive.”

One of her pet projects includes the development of a summer kitchen living history program, offering cooking experiences, which will soon be available.

The Gifts of Renfrew

Many visitors ask how the property acquired the name “Renfrew.” As the story goes, the property was settled by the Scotch-Irish Renfrew family in the mid-1700s. Two young daughters were killed and scalped by Native Americans in 1764.

Fast-forward past the Royer family’s ownership to the property’s last private owners, sisters Emma Geiser Nicodemus and Hazel Geiser. In 1975, Nicodemus gifted the property to the Borough of Waynesboro, specifying in her will that the home become a museum and the grounds a nature preserve. She specifically requested the property be named Renfrew in remembrance of the two young sisters.

“It was a gift given in philanthropic spirit, something that’s rare today,” LaBarre says. “For 45 years, families have been coming here to relax, play, and enjoy the heritage found here.”

Several school groups criss-crossed the property during our visit. The nonprofit Renfrew Institute was established 30 years ago as an educational partner to welcome area students.

And the spirit of community giving is still entwined with Renfrew’s mission today—about 25 active volunteers regularly donate their time and energy to the unique destination.

“Visitors learn how agriculture, industry, and decorative arts play into our past and how we benefit from them today—we offer a respite from the hurriedness of daily life,” LaBarre says. “Visiting Renfrew has a calming effect.”

Celebrating the Season at Renfrew

Farmstead Teas & Tour, for groups of 20+: ongoing; call to schedule.