Headlines
You are at:Home»Departments»Artisan»Metro’s Canvas

Metro Meteor is a horse of a different color

Metro Meteor is a diva—a 14-year-old thoroughbred horse with a storied history and a nippy personality to boot. He’s made appearances on “Good Morning America,” “The Today Show,” O, The Oprah Magazine, The New York Times, and countless other national and local outlets.

Metro isn’t your average horse—not by a long shot. He once competed at famed tracks such as Belmont and Saratoga, earning nearly $300,000 in winnings.

That’d make for quite the story, but it wasn’t the reason he earned segments in national media outlets. His race shoes had long been hung up—Metro last competed in 2009.

Metro’s tale easily could end right there: a famed horse with a winning pedigree living his remaining days in the loving care of Ron and Wendy Krajewski. But, Metro’s tale has a number of layers. At the home of the Krajewskis, Ron glances from the dining room table, where he shares details of Metro’s famed past, to a painting on the wall. 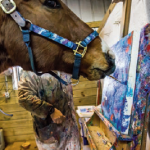 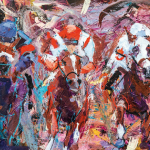 The abstract creation—filled with brilliant, bright colors—is just one created by Metro that hangs in the couple’s home.

You could call it a new lease on life for the famed horse who once was given just two years to live in 2013 due to debilitating bone growth in his knees—an ailment that ended his racing career.

But, Metro didn’t die. He found new life with an experimental treatment that extended a dim outlook on his life and a newly found passion to paint.

Yes, Metro is an artist—a world famous artist who has garnered international attention.

An Artist is Bred

Metro’s injured knees limited his ability to ride and freedom to roam in the pasture. But, Ron noticed that Metro loved to bob his head.

An artist himself, Ron saw potential in Metro. He gave Metro a paintbrush, added a canvas, and the ex-racer went to work—bobbing his head and splattering paint to canvas in majestic strokes.

“He’s nippy; he’s always getting his mouth on something,” Ron says. “He’s always bobbing his head up and down. He’s got the movement for it. I thought if I could put a paintbrush in his teeth, that maybe I could teach him to paint.”

“There’s all sorts of equipment to make horses go left or right or stop,” Ron says. “But, there isn’t anything to make the horse want to paint. He has to want to do that himself. Metro just loves to paint.”

The pair has become quite the duo. Ron’s artistic eye guides the palette choices while Metro provides the strokes and splatters.

“The second painting we did, it looked like something that could hang in a gallery,” Ron says. “It had a focal point and composition. It isn’t something he thought of; it just happened to come out that way.”

Over time, the pair developed a rhythm. “We know how each other works,” Ron says. “He’s a painting diva. Mariah Carey is easier to work with. You have to work around what Metro wants when you’re in his studio, or he’ll let you know that you aren’t doing it right!”

Metro’s art soon graced the walls of Gallery 30 in Gettysburg. It sold—quickly.

What makes Metro’s works so appealing? “A lot of it is the texture,” Ron says. “Humans just don’t make these brush strokes. These broken strokes where the layer underneath shows up through the layer above. Humans put more thought into it. They want the perfect brush stroke, and Metro just gets some very interesting textures and colors.”

His rise to fame was rapid. “It all went very quick,” Ron says. “He was in the Gettysburg paper, then a couple weeks later, he was in the Harrisburg paper. Then, a few months later he was on ‘The Today Show.’ He was Frank Deford’s commentary on NPR.”

As Metro’s fame as a painter grew, the condition of his knees improved. It was the day that “The Today Show” came to film Metro that the Krajewskis first noticed an improvement in his condition.

“They wanted some B-roll of the vet checking Metro out,” Ron says. “And, she went down to examine him and she went to squeeze his knees, which usually he would turn around and try to bite her because it hurts. And, the cameras are running and the mics are on and we’re just like, ‘Awwww!’”

“But we couldn’t say anything because the camera was rolling, but inside we were just jumping up and down,” Wendy adds. “We knew then that the treatment was working.” Metro’s painting has continued to be a big hit among art aficionados ever since.

Money raised from his works supports his knee treatments and half the proceeds are donated to New Vocations Racehorse Adoption Program. To date, they’ve donated more than $80,000.

“He’s actually saved horses that they normally wouldn’t have saved,” Wendy says. “He’s made an impact on so many,” including Ron and Wendy.

“I think he’s given meaning to our life,” Ron says. “We’re out here alone. All of our family is gone [out west]. Getting Metro and Pork Chop (a thoroughbred horse the couple also owns), they are our family away from family.”

Visit www.paintedbymetro.com to see Metro on “The Today Show,” NPR, and more.