Metaphysical Shops Meet the Needs of Mind, Body, and Spirit

After encountering the spirits of three Civil War soldiers walking across the battlefield, Lloyd Runkle knew for sure where he needed to be and what he needed to do.

“They told me that our center would be a way to return them to the light,” recalls Runkle, co-owner with his wife Leslie Dull-Runkle of Etheric Connections, a metaphysical store and healing center in Gettysburg.

He pauses for a moment as he becomes emotional. “We were definitely guided to Gettysburg,” he says. “When we first opened, I’d get texts from Leslie. She’s like, ‘I don’t know what’s going on back there, but it’s so noisy in these back rooms.’ That was the entities moving back into the light.”

Metaphysical shops such as Etheric Connections have quite the presence in Gettysburg and the surrounding area. The shops—with their emphasis on mind, body, and spirit—provide crystals and gemstones, reiki, herbs, tarot card readings, animal communicators, and much more. And, nationwide, a booming interest in all things metaphysical has emerged, no doubt furthered by the chaotic state of the world today. 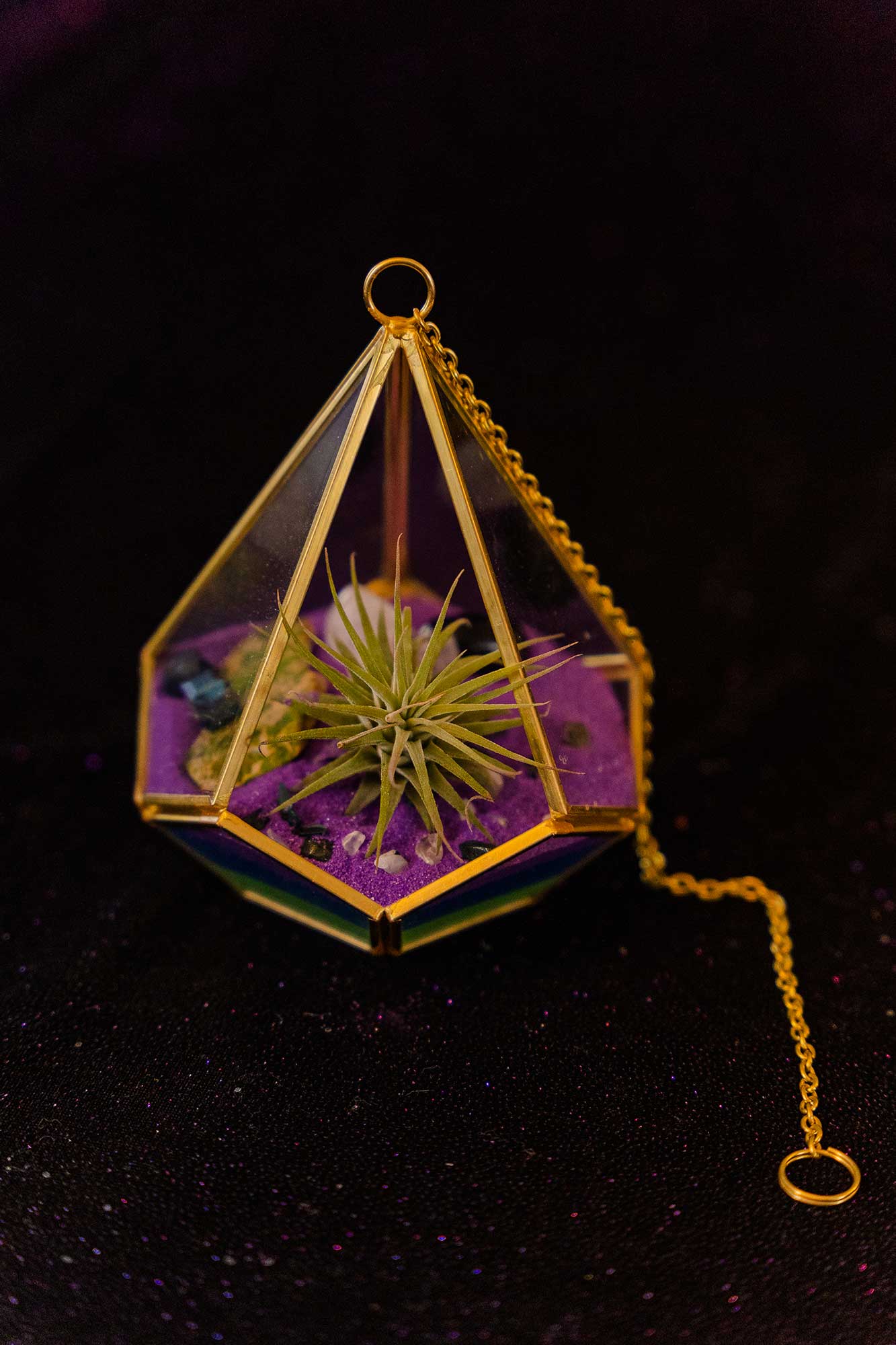 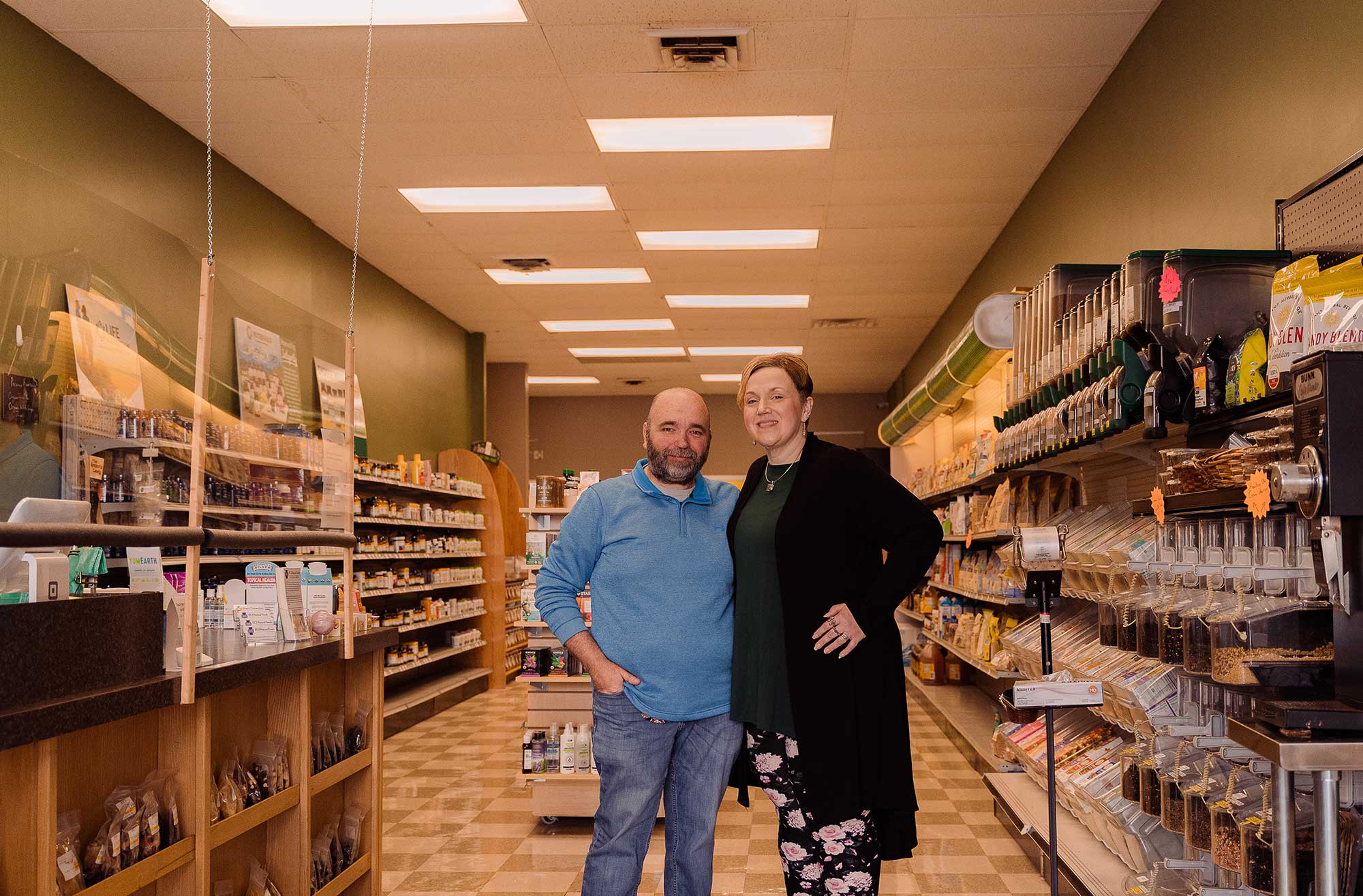 Crystals and gemstones have become especially popular in recent years. According to industry insiders, diamond sales are losing some of their luster, while crystal and gemstones sales have taken off. Those purchasing them are not just admiring their beauty; they are drawn to the idea of their healing power as well. Crystals and gemstones are said to allow positive energy to flow into the body, remove negative toxic energy, and enable healing.

For example, tiger’s eye is said to provide motivation and lessen fear; citrine is thought to spark positivity and optimism; and sodalite is said to bring calm and order to the mind and help with anxiety.

Johnny White, of Sacred Circle Moon Apothecary in Hanover, has seen people being drawn to a particular stone for a particular reason, time after time.

“It has a purpose,” says White, who co-owns Sacred Moon Circle Apothecary with his wife Jennifer. “They will come into the store and pick up a stone and ask about it. They will say ‘I have always been so enthralled with these reddish stones. What are they called? And what are they for?’ Inner peace, I tell them. Then they will say, ‘You know, I’ve always had a problem with that.’”

He came to the metaphysical world via Jennifer White, a Reiki master teacher, a certified crystal healer, and a licensed massage therapist who makes the salves, creams, and balms that are sold at the shop. He says it has been life changing for him—so much so that he left a 30-year career in the corporate world to open the shop with his wife.

“It’s a journey,” he says of his own experience.

And he delights in the journey of others who visit the shop. Even if it is just beginning with, say, the purchase of a single piece of crystal or gemstone or piece of jewelry.

“There’s a connection between ourselves and the metaphysical properties of crystals and those things,” he says. “So, it’s interesting to see people who haven’t been exposed to that at all say, ‘You know, that just makes sense. When I have these things with me, I feel happier, better. I have less anxiety, less stress. I’m able to get through my day.’”

The crystals and gemstones found at metaphysical stores can come in a more natural state, although some are cut and polished or made into jewelry. Or skulls.

Etheric Connections and Etheric Connections TOO—also owned by the Runkles, who own several metaphysical stores and facilities in Gettysburg—house a couple of hundred skulls at any given time. The skulls come in a variety of crystals and stones varying in size from one inch to 25 to 30 pounds and cost anywhere from $12 to $5,500.

In fact, a large, human-sized crystal skull has a place of honor at Etheric Connections. “His name is George,” says Runkle. George, made from Brazilian quartz, was the first crystal skull that Runkle connected with years ago, he says.

As proven by the presence of George, many metaphysical store owners have a deep connection to their shop and the items inside it. It is not just a business but, in many ways, a calling.

“I can’t imagine not doing this,” says O’Dell, who developed an interest in the metaphysical world as a young girl.

So much so that when her store was destroyed by fire recently, she was determined to open again—and did so at a new location in Gettysburg, “rising like a Phoenix from the ashes,” she says.

And that was very good news for many in the community … including the ghost hunters.

“Oh yeah, I love the ghost people. They’re our biggest crowd,” O’Dell says of those who come to Gettysburg in hopes of having a ghostly encounter. Many of them stop by The Crystal Wand to stock up on the supplies needed for ghost hunting, such as dowsing rods, said to move or dip when held over ground where water and metal can be found. The rods are also believed to detect spirits and assist in communicating with them.

“They are a good sellers,” says O’Dell. “Crystals and gemstones, tarot cards, dousing rods, and pendulums are all good sellers.”

O’Dell says she believes in ghosts. And science. “I am a big fan of Steven Hawking,” she says. “The magic in the world is essentially quantum physics.”

But she is not interested in encountering a ghost herself. “Come to me in a dream,” she says. “Do not show up. I cannot handle it.”

But that hasn’t stopped them from visiting her. O’Dell has been told by customers at her previous store that there were two older ladies who would sit at the front of the store, arms crossed, keeping a keen eye on customers.

“My mother and aunt,” says O’Dell with a chuckle. “They were looking out for me and the store.”

And she delights in the photos of possible encounters that ghost hunters share with her as well as the stories they tell when they come to the shop. “They’re just so happy to share it with someone who doesn’t think they’re crazy,” says O’Dell.  “And it’s like, yeah, we know.

Because we’ve seen some things. They know we understand.”

It is a community.

Working in such an environment can be extremely gratifying, says JoAnn Shorb, Lam’s daughter.

At Lavender and Sage, Shorb provides Reiki, a healing technique based on the principle that energy can be channeled into the patient by means of touch, activating the natural healing process and restoring physical and emotional well-being.

Shorb, who is also a medium, recalls a Reiki client who had not slept a full night in two years. “He could only sleep maybe an hour,” says Shorb. “He was suffering from really bad anxiety.”

Following his session with Shorb, however, he was calling her first thing the very next morning with good news.
“He said, ‘I don’t know what you did to me, but it was amazing,’” she says.
“He told me that he slept.”

Slept so deeply, in fact, that a family member checked on him.

“I love helping people,” says Shorb.
“We love what we do,” echoes Lam.

A sentiment Kathy Helms, of Hanover, understands all too well. Helms is an ordained minister and an intuitive empath who reads people’s energies and operates her own metaphysical business from her home. An author of books on meditation and being, she also offers meditation sessions, intuitive training, and psychic readings.

The idea is if one can’t go to the garden to mediate or to experience calming and positive energy, let the garden come to them. It’s a reflection of and reaction to today’s fast-paced, bring-it-to-me society.

“I don’t call them meditation gardens but, to me, that’s how I see the purpose of them,” says Helms, who began her metaphysical journey by learning and then teaching meditation.

The gardens, with their playful themes of fairies or gnomes, include succulents and crystals and even incense, among other items, and all with the purpose of promoting positive energy. They can be easily placed on a desk at work or on a table at home. Helms also creates hanging terrariums.

“My intention is to bring people joy through these gardens,” says Helms.

And she does it by taking an ancient practice and giving it a unique and modern twist. It’s yet another way to meet the needs of those who may be on their own metaphysical journey.

“We are all just doing our part,” says Lloyd Runkle.

Take Your Own Metaphysical Journey: