Headlines
You are at:Home»Departments»Mela Kitchen

There’s a new show in town at Gettysburg’s former Frank Theatres. It’s not a Hollywood production, but there’s plenty of action, name recognition, and star power.

Mela Kitchen, led by Chef Josh Fidler, is Gettysburg’s newest restaurant. Affiliated with parent company Jack’s Hard Cider and Atomic Dog Wines, it’s located at the former movie house at The Outlet Shoppes at Gettysburg. For a company with apples at the core of their business, the name “Mela,” Italian for “apple,” makes perfect sense. It’s also a healthy icon. 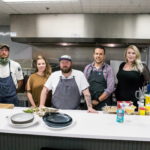 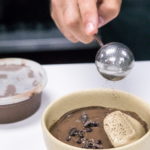 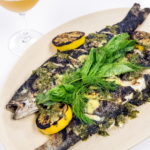 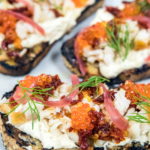 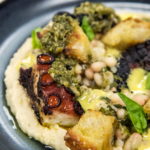 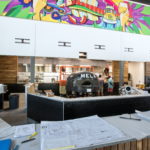 Interior while being renovated

Area foodies may recognize Fidler’s name from his previous beloved Biglerville restaurant Fidler & Co. Craft Kitchen, which closed several years ago. He says the opportunity to build a team and menu for Mela Kitchen is the highlight of his 20-year career.

“It’s very special. Coming back to Gettysburg, my hometown, is such a gift,” says Fidler.

Jack’s Hard Cider was founded in 2008 as part of the former family-owned Hauser Estate Winery. In December 2018, Donald Hoffman of Rockville, Md., bought Jack’s, merging it with the new Atomic Dog Wines and Mela Kitchen. There’s a family connection; Hoffman’s son was a college roommate of Jonathan Patrono, grandson of Jack Hauser, the cider’s namesake.

“[My brother] Jonathan built Jack’s from the bottom up, so it’s very special for us to still play a part,” says Polly Patrono-Carlson, marketing director. “All of our cider production is here now, under one roof with the restaurant, so we envision morphing into a cider house or tap house similar to Tröegs or Yards.”

The Cast and Crew

Mela’s team reads like a who’s who in central Pennsylvania restaurants, or as Fidler says, “a good cast of characters.”

His right hand is Littlestown native Brent Golding, chef de cuisine, who previously worked at Hanover’s Sheppard Mansion under celebrated Chef Andrew Little and at Antrim 1844 in Taneytown, Md., among others. And he’s glad his world collided with Fidler’s.

“We both have pretty extensive backgrounds,” Golding says. “It’s a shift in the restaurant culture—to have two strong people working side-by-side in tandem is not only good for the operation, but also for the restaurant.”

David Bortner is on board as sous chef, coming off 10 years of experience at Restaurant Sidney, plus stints at Hanover’s Warehouse Gourmet and Gettysburg’s Garryowen Irish Pub.

Leading the front of the house is general manager Maria Wolf, whose friendly face is recognizable to Fidler & Co.’s previous patrons.

“My main goal is based on community—from the farmers we’ll be working with to the tourists and local community,” says Wolf. “We want to be inclusive … to build relationships.”

Assistant manager Ilsa Chesnick is moving back to her native Adams County after gaining experience in several Philadelphia-area breweries. And she has a special connection to Mela Kitchen’s location—she served as assistant manager of Frank Theatres when she was 19.

Heading up the 30,000-square-foot cider and wine production area is Joe Cuneo-Tomasi, in his eighth year, or “eighth harvest” as he says, with Jack’s. He’s developing five wines under the Atomic Dog Wine label plus coordinating monthly small batch releases for Mela Kitchen—leading off with a sweet tea barrel-aged bourbon.

Glancing through the menu will give longtime Fidler & Co. patrons a sense of familiarity—a comforting feeling of being home again—with new twists and turns.

“It’s a fresh menu with an Italian sensibility, meaning we’re creating a menu with a social aspect to it, to replicate a family meal in a restaurant setting,” Fidler says.

One of the most shareable dishes of all times is pizza—and Mela Kitchen’s centerpiece is an Italian-style pizza oven constructed with imported bricks of lava rock. Creative pizza combos include fennel + bresaola (dry, salted beef) and apple + bacon (including cheddar).

We tried several “small plates,” including smoked trout toast and grilled octopus, in which tarragon is the unsung hero, playing off the bright splashes of lemon, red wine vinegar, chili oil, and salsa verde to mingle with basil and thyme and flavoring the mild charred octopus and base of Italian white beans. Additional small plates, likely not found in area restaurants, include fried artichoke heart and Prince Edward Island mussels in cider broth.

We also tried the delicious whole grilled branzino (a mild, white fish) from the menu’s “family style” section, featuring dishes meant to be passed and shared.

From Popcorn to Pop Art

The open-design concept couldn’t have come at a better time.

“It’s definitely a challenge opening a restaurant during a pandemic,” Fidler says. “As lifelong restaurant people, we collectively went through a little stretch of grief for our industry … the restaurant industry is meant to be social.”

That being said, “restaurants have always been stringent on sanitation and best practices—we just have to take it a couple steps further during this time,” Fidler added.

In the near future, visitors will be able to take self-guided tours of the production area from a mezzanine overlooking the entire apples-to-canning process. One of the movie theaters is being repurposed into a special event area for corporate and wedding receptions.

Just as the upcycling process is circular, so too is the guiding philosophy behind Fidler and Golding’s menu for Mela.

“Every chef goes through phases,” Fidler says. “We’re both coming full circle, back to simply letting ingredients speak for themselves by sourcing the best ingredients and flavors.”

uture, visitors will be able to take self-guided tours of the production area, from a mezzanine overlooking the entire apples-to-canning process. One of the movie theaters is being repurposed into a special event area for corporate and wedding receptions.

Just as the upcycling process is circular, so too is the guiding philosophy behind Fidler and Golding’s menu for Mela.

“Every chef goes through phases,” Fidler says. “We’re both coming full circle, back to simply letting ingredients speak for themselves, by sourcing the best ingredients and flavors.”