Headlines
You are at:Home»Departments»Scott Hancock: His Story, History

Story and photography by Karen Hendricks

On July 4, as militia men armed with assault rifles swarmed into Gettysburg in response to a hoax claiming Antifa was headed to our Civil War-era town and battlefield, Scott Hancock was arming himself with facts.

Those facts were handwritten by his wife Patty on white poster board signs he bought at Wal-Mart. He phoned a few friends two nights before and mustered a little group—three of them white; two of them, like him, Black.

They walked through the heat, with their facts and some bottled water, across the hallowed grounds of Gettysburg National Military Park. Specifically, they walked along Confederate Avenue, where 11 memorials pay tribute to thousands of soldiers from 11 Confederate states who fought during the Battle of Gettysburg in July 1863. 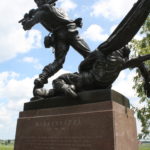 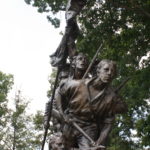 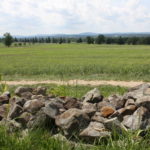 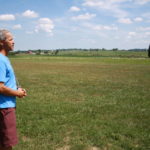 Beyond marking the battlefield positions of southern soldiers, do these monuments stand for additional reasons or values? Hancock says yes.

Across 6,000 acres of the battlefield already dotted with more than 1,300 monuments and markers, are there additional facts and stories going untold? Again, Hancock says yes.

He’s giving voice to those facts and stories.

And he’s starting to be heard.

Hancock and his friends had done this numerous times over the past five years. But July 4, 2020 was different.

“Any time there’s a major display or support for Confederate symbols, we want to take the opportunity to provide another voice, a perspective that I would argue is better history,” Hancock says. “This is the first time when there’s been zero interest in conversation—it was just yelling, insults, and intimidation.”

Hancock, 58, has lived in Gettysburg with his family since 2001. He’s been a history professor specializing in Africana Studies for about 20 years, and he’s currently in his third year as chair of Gettysburg College’s history department.

Before that, he worked in group homes for troubled youth. While in Ohio,  he and Patty served as house parents at one of those homes for three years. During his college days, he volunteered at a prison. Looking back, his career path likely prepared him for the situation he faced on July 4.

“I get uncomfortable with compliments because I think we all have our gifts,” Hancock says. “But I have no doubt that 14 years of dealing with angry people probably helped give me a skill set or techniques that came in handy.”

And some of it is captured on video. Documentary filmmakers uploaded about seven minutes of footage showing the confrontations between Hancock and battlefield visitors. It’s been viewed 17,000 times, as of press time.

There are nearly 100 comments, many of them praising Hancock, especially for his ability to stay calm while visitors argue and yell, “Do your research.” Others see the color of his skin and make references to “you people,” meaning Blacks. “I’m not interested in hearing your facts,” another man says, in response to Hancock’s attempts to dialogue. Yet another yells, “Get the hell out of here.”

Why did Hancock face such a firestorm? What facts were on his homemade poster board signs?

One, which he held near the North Carolina memorial, gave additional background information about the sculptor who created it. Gutson Bortglum, who also carved Mount Rushmore, was an avid supporter of the Ku Klux Klan (KKK).

“And so you have someone who’s constructing a monument for a government whose organizing principle was to keep Black people enslaved. And that sculptor is supporting an organization that was birthed out of the Confederacy’s inability to win that war and to try to maintain Black subjugation. So does that mean that Borglum’s racist thinking or ideology dictated what the monument looked like? I’m not an expert on art, and there are probably people who can better answer that question than me, so I don’t know, but I think visitors should know that,” Hancock says.

In the shadow of the Virginia memorial at Gettysburg, topped by a bronzed Confederate Gen. Robert E. Lee, Hancock held another poster, with text taken directly from the black-and-white front page of a Richmond newspaper in 1864. It read, “We are fighting for independence that our great and necessary domestic institution of slavery shall be preserved.”

And that is the very crux of the issue.

More than 157 years after the Battle of Gettysburg, there are still people who do not believe that the root cause of America’s Civil War was slavery. And Hancock contends that many of the Confederate memorials, erected during the Jim Crow era of segregation in the south, contain elements of racism or pay homage to the Confederacy.

“You could spend all day on the battlefield and not have any clue that the Civil War had anything to do with anybody Black. The museum center does a great job with it; the battlefield does not, but hopefully that’s changing.”

To be clear, Hancock isn’t advocating for the Confederate memorials to be taken down. What he is advocating for is a more complete story of history—the very fact that slavery was indeed one of the causes of the Civil War, the facts about Bortglum’s ties to the KKK, and the documented accounts of Lee’s cruel treatment of his slaves.

“If people want to understand why there’s a battle here, then we need to figure out a way to have the battlefield tell the story about slavery and slaves as well,” Hancock says.

As he walks through the late summer grass along Southwest Confederate Avenue, additional facts are literally on the horizon. South Mountain, the northernmost section of the Blue Ridge Mountains, is more than a picturesque vista to the west. W. E. B. Du Bois called it “the great Black way.” Those mountains pointed the way to freedom and formed just one route along the Underground Railroad.

Hancock says a relatively small percentage of slaves escaped to the north, and it caused a response from white southern slave owners that was out of proportion.

“Which led me to the conclusion—
I think you can make the argument that these Black men and women, who are perhaps the most powerless people in American society at the time, are exercising a degree of influence on American politics and law out of proportion to their numbers, and they’re a key part of what drove our nation to war,” says Hancock. “So why do we have a battlefield at Gettysburg? We have a battlefield because there’s a Civil War.
So why do we have a Civil War? Part of the reason we have a Civil War is because we have escaping slaves.”

The National Park Service has a statement on Confederate monuments and flags directly on Gettysburg National Military Park’s website.

“These memorials represent an important, if controversial, chapter in our Nation’s history. The National Park Service is committed to preserving these memorials while simultaneously educating visitors holistically about the actions, motivations, and causes of the soldiers and states they commemorate. A hallmark of American progress is our ability to learn from our history,” it reads, in part.

Jason Martz, acting public affairs officer at Gettysburg National Military Park, points out that the Confederate memorials were each authorized by Congressional legislation.

This fall, the National Park Service is adding “more context” to the wayfinding signs that already exist near the Confederate monuments. Twelve wayside exhibits will be installed (one for each of the 11 Confederate memorials, plus one by the Confederate soldiers and sailors monument).

“We’re utilizing primary-sourced documents found here in our collection at the park—documents that exist from the initial planning phases of the monuments to completion, pictures from the time of dedications, or relevant pictures to add historical context,” Martz says.

In addition to consulting with onsite Gettysburg National Military Park staff for the exhibits’ text, Martz says the park service plans to reach out to Hancock as well as the Gettysburg Black History Museum for “a holistic approach.”

The timing of the exhibits, Martz says, “would appear” to be coming out as a result of the racial reckoning across America in the wake of the death of George Floyd. But in actuality, the signage has been in the works for about four years. It’s part of a larger project evaluating, rehabilitating, and replacing about 90 wayfinding signs that are worn or faded. Most will be installed through the spring of 2021.

Martz points out that Black history is incorporated into many Gettysburg National Military Park programs. Interpretive ranger-led programs on the African American experience at Gettysburg have been offered for years.

Hancock believes the new signage is a first step in the right direction.

“My concern is … These monuments are really spectacular, so a sign can’t compete with that. I think it’s a critical first step that must be taken, but if it ends here, it’s really a long ways from doing everything that ought to be done in my opinion,” says Hancock.

“I think these monuments are a really good opportunity to educate the public about how white supremacy and whiteness get sort of resurrected and maintained and protected, and that has a cost—a real cost for people,” Hancock says. “So if you remove them, you lose that opportunity. This is how the Civil War still shapes our country and has for 150 years.”

One More Side of the Story

In early August, the Association of Licensed Battlefield Guides discovered language buried in legislation that passed the House (HR-7608) that would effectively remove all Confederate monuments currently standing on federally-owned lands. That would include Gettysburg and all Civil War battlefields.

“We keep watch for anything that affects Gettysburg. We have a committee keeping track of legislation, and it took them several days to find this—it was buried,” says Les Fowler, in his second year as president of the association, which represents about 125 active guides.

The legislation is not likely to pass through the Republican-controlled Senate, but Fowler says the guides aren’t taking any chances. They’re lobbying, and encouraging other to lobby, U.S. senators to have this provision removed.

“We’re pretty disturbed that it got out of the House,” said Fowler. “This would affect our ability to interpret the battlefield … our concern is the preservation of history and our ability to communicate that history.”

See the YouTube video of Scott Hancock on July 4, 2020

Visit the Gettysburg National Military Park website at nps.gov/gett/index.htm and the Association of Licensed Battlefield Guides at gettysburgtourguides.org.