The Battle of the Bulge during World War II started 75 years ago on Dec. 16, 1944. As Allied casualties mounted, air support was grounded in England because of dense fog. 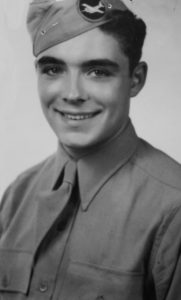 Rich Weaver of Bonneauville was a young paratrooper at the time waiting to fly across the English Channel to fight in the Ardennes region of Wallonia in eastern Belgium, northeast France, and Luxembourg.

On Christmas Eve, Weaver says hundreds of soldiers packed themselves into a large building. There was barely room to sit down, and the building was kept dark in case an enemy bomber happened to fly over.

“We were packed in like sardines, and you could hear kids crying in the dark,” Weaver says.

The soldiers had been issued small versions of the New Testament. One of the soldiers must have had a small flashlight because he started reading from the Gospel of Luke about the birth of Jesus Christ. When he finished, the soldiers started singing “Silent Night.”

“It was beautiful,” Weaver says. “You never heard it sang like we sang it.”

The men then went back to the bunk to sleep. In the morning, the fog had lifted, and the men, including Weaver, boarded planes and joined in the fighting.

Weaver flew to France with the mission to stop the German advance on the southern flank of the bulge. The planes attacked the Germans and their supply lines, which many historians believe cemented the German loss during the offensive.

The Battle of the Bulge was the bloodiest single battle fought by the United States in World War II. Roughly 89,500 Americans were killed, wounded, missing, or captured during the battle. Over the course of the entire war, more than one million Americans were killed or wounded.

Rich Weaver of Bonneauville was a paratrooper in the Battle of the Bulge in 1944.

Within five years, the “Greatest Generation”— this group of Americans who grew up during the Great Depression and went to war in the 1940s—will be gone.

Of the 16.1 million Americans who fought in World War II, 15.7 million returned home to live through decades of social turmoil, economic prosperity, and, sadly, more war. In September 2018, the U.S. Department of Veterans Affairs estimated that only 496,777 World War II veterans still lived. That number may now be only around 348,000 veterans because it is also estimated that 348 of them die each day.

For now, less than 10 of them still remain in Adams County.

As a 17-year-old teen, George Fisanich of Carroll Valley was delivering newspapers when he read about the D-Day invasion in June 1944. By the fall, he had turned 18 and was drafted into the U.S. Army. He was assigned to the 82nd Airborne Division’s 325th Glider Infantry Regiment. He had no experience flying and had barely heard of gliders.

By this time, much of the fighting was over, and it seemed that Germany was going to lose the war. “I was shot at from time to time, but I was lucky. I was never hit,” he says.

Fisanich was marching with the British Army in northern Germany when he heard that Germany had surrendered. He watched thousands of German soldiers marching west so that they could surrender to Americans rather than Russians.

He was part of an Allied group that occupied Berlin after the surrender.

“People we talked to in Berlin were glad it was over,” Fisanich says. “They probably knew a year or two earlier they weren’t going to win. Hitler or no Hitler, they could see that happening.”

This didn’t mean that they were angry with Hitler. Fisanich says they were more disappointed with the outcome and had accepted it.

He said there were very few men in town. “You couldn’t find five guys in town,” he says. They eventually started seeing wounded soldiers returning home to their families.

Fisanich also helped secure the city of Ludwigslust and liberate many people in the nearby concentration camp at Wöbbelin.

He and two of his brothers all returned safely from the war. A younger brother was later drafted and fought in Korea. An older brother was too old for the draft.

“It was an experience I wouldn’t wish on anybody,” Fisanich says.

Weaver can still recall the details of his World War II experience, and he still gets choked up when recalling friends and comrades who died in the war.

Weaver volunteered for paratrooper training because he didn’t want to have to fly in gliders that Airborne used.

“They were flying coffins,” he says of the gliders. “I thought if I made the paratroopers, maybe I’d have a chance to control my life a little bit.”

When World War II ended, Weaver was reassigned to the 82nd Airborne Division and performed occupational duty in Germany.

Time is now taking those whom the Axis couldn’t kill during the war. With so few World War II veterans still living, organizations are making efforts to honor them and their service during the years marking the 75th anniversary of the war. 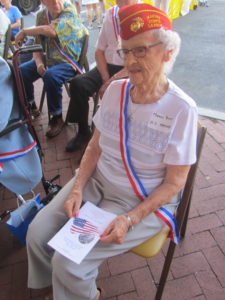 Milton (Babe) Moyer – U.S. Navy
Babe Moyer served in the U.S. Navy from 1945-47 as a corpsman. After basic training in New York, he was sent to San Diego. He ended up at Oceana, near Virginia Beach, where he served at a base hospital caring for those wounded during the war. Moyer was later transferred to Portsmouth, Va., to work at a larger hospital. After the war ended, Moyer was asked to serve an additional six months due to the enormous amount of service personnel that required medical attention.

Joseph (Joe) O. Sanders – U.S. Army Infantry
Joe Sanders joined the U.S. Army toward the end of the war and was stationed in Italy when the war ended. He worked as a clerk in the Replacement Headquarters Depot. After the war, he was sent to Manila, Philippines, and then to Tokyo, Japan. When Sanders arrived in Manila, he saw nothing but devastation. The entire city had been destroyed. When he went down to the port to greet a crew of soldiers one day, Gettysburg’s Sebastian (Bas) Hafer got off a ship. Sanders greeted Hafer and welcomed him to war-torn Manila. A few years ago, Sanders presented the late Hafer with an Army challenge coin and said, “I greeted you during your first military assignment in devastated war-torn Manila. Now I am presenting you with this challenge coin and welcoming you home.”

Julius (Jules) Swope – U.S. Navy
Jules Swope served on supply ships during World War II. During the time of the D-Day invasion, Swope was in the Mediterranean serving on a ship carrying supplies to the troops so that they could carry out the D-Day mission. Swope also served on a Landing Ship Tank in Japan during the war.

Francis Kenneth (Ken) Oakes – U.S. Navy
Ken Oakes served in the U.S. Navy as a seaman first class in the Pacific Theater, entering active duty service in February 1945. During World War II, he served on the U.S.S. Ticonderoga, the U.S.S. Essex and the U.S.S. Bennington. He was discharged from the active Navy on July 11, 1946 and then entered the U.S. Navy Reserves until he was honorably discharged on July 11, 1950. He then enlisted in the U.S. Army Reserve. He first served in the Army Reserve with the 464th Field Artillery, followed by a stint with a military police unit and then an air defense artillery battalion until April 1960. He re-enlisted 15 years later and served with the 440th Medical Company from April 1975 until September 1985.