It was a sound Philip Brown says he will never forget.

“I remember in Montana being able to hear air rushing through the forest, and it was going towards the fire, and that’s the fire basically consuming all the oxygen,” he says. “It was this big, roaring sound.”

For Brown, a maintenance worker at Gettysburg National Military Park (GNMP), helping to fight that major wildland fire was not a typical day on the job, or even his typical job, for that matter. But there are those employed at the park who heed the call when needed.

Brown is one of 14 GNMP employees who participate in the park’s firefighting program under Dafna Reiner, a park biologist and wildland fire coordinator. And, as such, they are involved with assisting in battling the massive wildfires in the Western states and prescribed fires used for land management at GNMP. “It’s called collateral duty firefighting,” says Reiner of the program. “So firefighting is not our primary duty. We have our regular jobs. Our collateral duties. Of our 14, about half participate in the national wildland fire efforts and go out West.”

Parks employees who want to become firefighters must go through specialized training, pass a medical exam, and undergo a yearly physical fitness test. Those volunteering for the major blazes in the West, where wildfires are so deadly and prolific, often do so when they have the availability to be away from their regular job duties for several weeks. 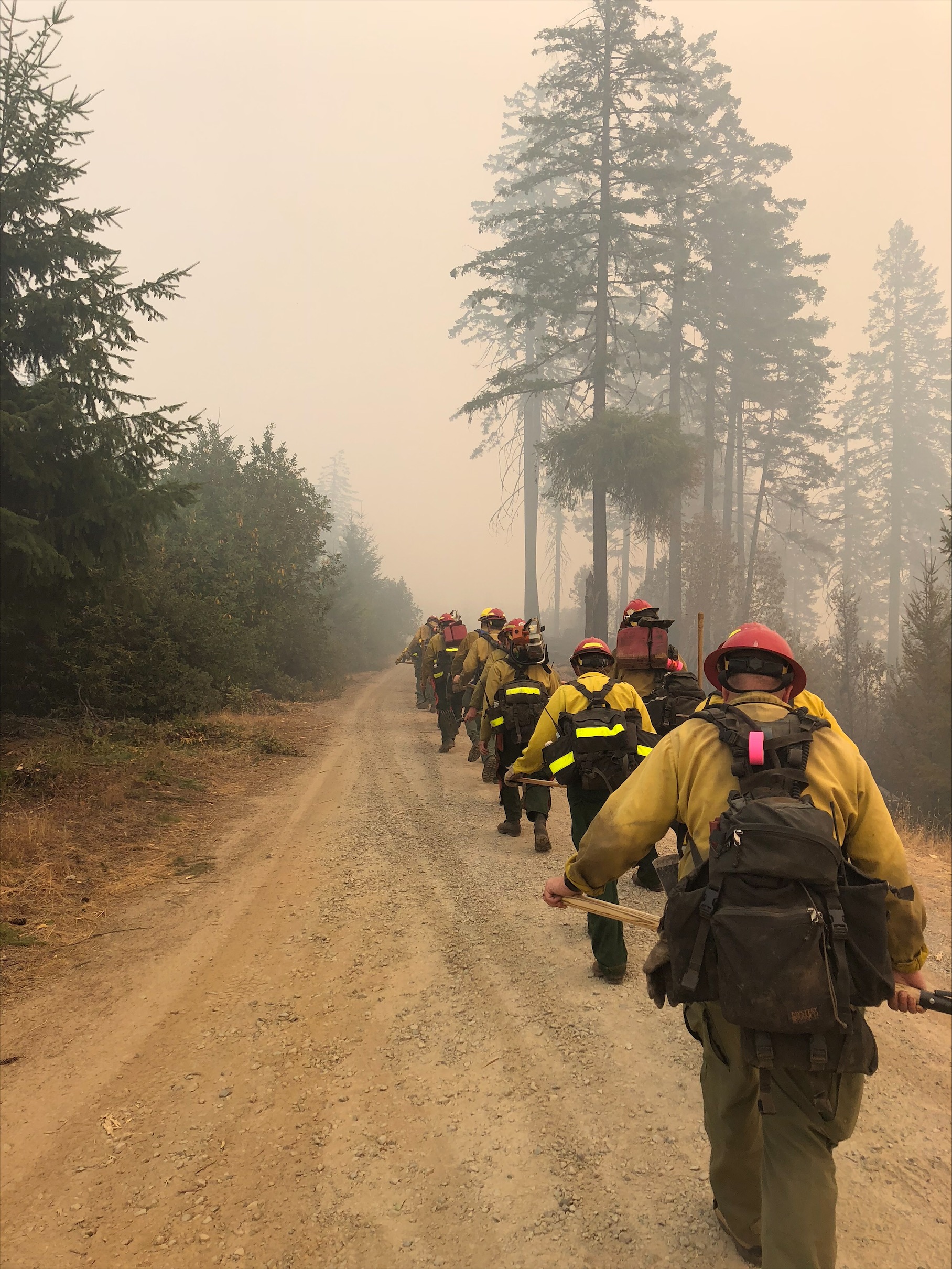 And, those like Randy Hill, a supervisory facility operations specialist for landscape preservation at the park, will tell you he is committed to the effort. “As soon as the park developed its fire program, I was first in line,” says Hill, who has battled blazes in Washington, Oregon, and California.

He is not alone in his enthusiasm.

“Even as a kid, that was one of the things I wanted to be when I grew up,” says Brown.

Mark Cochran too. “My brother wanted to be a policeman,” says Cochran, a historical land preservationist at the park. “I wanted to be a fireman. But life happens and dreams change.”

Now they are all getting their chance as part of an elite crew working through the National Park Service.

Through this work a bond is created. “You can have some big walls of fire coming right at you,” says Cochran. “But you just have to trust in your training and trust in your crew. Everybody is looking out for everybody else.”

As the science of fire has evolved, so has the way it is controlled and contained.

“The days of going and fighting the fire are the days of old,” says Hill. “You’re not just running into the burning woods with a shovel. We take a much smarter approach to things nowadays.”

“We figure out a good stopping point, and we work our way from that stopping point back towards the fire,” says Hill. “We clear any fuels—brush, grass, trees. And we set a fire to go back and meet that fire, which essentially removes all the fuels and stops the fire from advancing.”

The work is not confined to those who are actually on the fire line; logistics and advisory roles are also needed when battling fire. Reiner, for example, goes out as a fire line resource advisor. “I no longer carry a chainsaw, but I do go out on the fire line and help advise,” she says.

All have a healthy respect for fire and what it can do.

Regardless of one’s role, it is risky work. “I think fire is the most powerful force on earth,” says Brown. “It consumes everything. If it wants it, it takes it.”

“We do our best when we’re out there to try and control the fire as best as we can, but there are no guarantees,” says Cochran.

And the results can be devastating. Brown remembers waking up one morning at a firefighter campsite to no sun. “We came out of the tent, and it was still dark,” he recalls. “We were really confused. The ash cast off of the fire had actually blocked out the sun that morning. It was almost like a solar eclipse. The sun eventually broke through, but everything was sort of muted in color.”

Then there are the more personal interactions with those facing the loss of what they have and love. Cochran recalls a man desperate to save his beloved dogs during an evacuation of a Colorado town. “There was this big fire coming toward this town and it was just chaos,” he says. “As we were making our way through, we had stopped at a checkpoint and there was a guy begging us if he could hop in the back of our truck. His dogs, including a geriatric dog who was blind and deaf, were up in this cabin and police weren’t letting him through.”

Given their duties, they couldn’t help him. “So that was pretty heart wrenching,” says Cochran. “Because you know a lot of people on the crew had a pet at home, and it kind of tears you up.”

Fortunately, Cochran later learned the man was able to retrieve his dogs and all were safe and sound.

Hill also has had personal encounters with those put in harm’s way. While working on a fire crew in Washington, he got to know people who were making sure the crews were fed each day.

“They had to evacuate their house because the fire was pushing onto their home,” he says. “Here they were feeding us and knowing us by name and seeing our faces every single day, and yet their house was in threat of danger.”

Not that all experiences are worrisome, though. There is a sense of deep gratitude.

“I remember we would get off in the evening and go pick up our dinners and there were a lot of thank you notes on the tables,” says Cochran. “Some from kids.”

Brown says that people often ask him where he’s from. “And they can’t believe it—that people would travel all the way from the East Coast to be there,” he says.

However, coming home and adjusting to normal life again can be a challenge, especially during the summer months when people are setting off fireworks. “I do enjoy it to a degree,” says Cochran. “But then there’s always that itch in the back of my brain. I’m looking around and noting which direction the wind has taken. Has it changed direction? I definitely view things differently.”

And there is no end in sight to the devastating fires in the West due to drought and the increase of the fuel available to fires. “You have to keep in mind that nature has a cycle,” says Hill. “One of the reasons fires are so intense now is because we spent years and years trying to put them out immediately. And, because of that, a lot of fuels grew up, which makes the fires much more dramatic and much more intense nowadays.”

According to the National Interagency Fire Center, more than 3 million acres have burned every year since 1999, and the acreage burned each year is increasing.

“It’s going to get worse,” says Reiner, who was a full-time firefighter with the National Park Service for eight years. “Fires have gotten bigger, scarier, and more uncontrollable. It used to be that you would part ways and the traditional farewell was, ‘See you on the next big one.’ Nobody says that anymore, because they are all big ones.”

So the Gettysburg National Military Park firefighters continue to stand ready for the call. “We are in a position to have this skill set,” says Brown. “And that skill set is important to a lot of people in the country. And I think stepping up to make use of it is very important.”

Lisa Gregory is a compassionate and creative writer extraordinaire who became a part of the CG family a few years ago. Her articles have appeared in publications nationally and internationally. She is also a published author of fiction with short stories in the books “For the Love of Gettysburg” and “On Hallowed Ground.” She lives in Taneytown, Md., with her husband and on the weekends, you can find her on tour with her son’s rock band, Ignite the Fire. “It has been an amazing experience and exposed me as a woman in her 50s to a very different world,” remarks Lisa of her experience with the band.