Headlines
You are at:Home»Departments»Artisan»‘Writerly Things’

They include a midwife, an elementary school teacher, a former high school history teacher, and a former member of law enforcement, among others, and they all have one thing in common—a shared love of writing. So once a week they meet upstairs at O’Rorke’s Family Eatery and Spirits in downtown Gettysburg to discuss, as they put it, “writerly things.”

The group, the Gettysburg Writers Brigade, has published its first anthology, Four Score & Seven Stories Ago. And, in doing so, its helped to realize a dream for some of its members.

Available on Amazon.com, the anthology is a collection of short stories written by group members, ranging from historical fiction to murder mystery to science fiction—and even a ghost story. A Gettysburg connection is a common thread for all the stories. 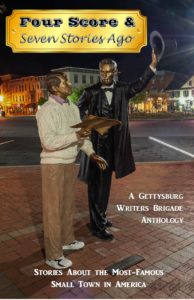 “Each of us looks at Gettysburg through a different lens,” says Bob Scappini, a member of the group whose short story Keep Me in Your Heart, For I’ll Be There Forever is included in the anthology.

Will Hutchison, a retired military and law enforcement officer who is also a photographer and author of historical novels, founded the group a decade ago as a way to pursue his love of creative writing with others.

The mission of the Gettysburg Writers Brigade, he says, is to provide practical tools and guidance on the writing process while supporting and encouraging its members with their writing endeavors.

“Everyone is trying to do the best they can to get everybody as knowledgeable as possible in writing techniques and to enjoy the experience of being with people who have the same kinds of thoughts,” Hutchison says.

“It’s just a cauldron of ideas,” adds Scappini, a former history teacher who retired to Gettysburg from Rhode Island, of the group. Besides his short story in the anthology (which begins with the intriguing line “I saved my sister from drowning, and she never forgave me”), Scappini has also just published his first book of fiction, Fire Across the Sky, a period thriller about Thomas Edison.

“What is most gratifying to me is that I was the only one published 10 years ago,” says Hutchison, who also contributes a story to the anthology. “Now, in the group, a lot of folks are published—articles or short stories or books. None of that was true in the beginning.”

And the anthology certainly helps. Six out of the 11 individuals published in Four Score and Seven Years Ago are being published as creative writers for the first time.

And, says Jim Rada, a long-time member of the Gettysburg Writers Brigade and an established historical fiction and nonfiction author with more than 30 published books, that was the hope when he presented the idea of the anthology to the group. “I believed it would be an educational tool to take the group from start to finish with a project,” says Rada, who provided a story for the anthology as well. “So they knew how each aspect is handled and what goes into formatting a book, editing a book, marketing a book.”

Especially those who might have been hesitant to do so before. “It was a great opportunity for capable people who may have doubts in their ability,” says Hutchison.

Like Felicia Valasek Rizzo. “Writing was something that I’ve always done, but not something I always shared,” says Valasek Rizzo, an elementary school teacher. Her story for the anthology, The Rumor Mill Runs Deep in Gettysburg, is historical fiction based on true events that tells the story of how one man’s decision will impact him during the Civil War.

Rizzo says that the success of the anthology and her participation in the group has encouraged her to continue her work on a novel she has long wanted to write, and it’s the reason she moved to Gettysburg to do so. “It’s something I’m passionate about, and I’m going to write it and put it out there,” she says.

J.L. Derwart says she too has grown as a writer since joining the group and from her experience of contributing to the anthology.

“We all learn from each other, no matter what skill set we have,” says Derwart, a homebirth midwife who also practices integrative medicine and whose anthology story is a murder mystery titled The Attic of Secrets, based on a true family story. “We’re not all published authors. Some are aspiring published authors,” she says. “Will and Jim have it set up so we have a structure to it and discuss specific topics. We actually learn the process of writing. That’s really helpful.”

Upon its release, Four Score & Seven Stories Ago hit the Top 10 in three Amazon.com categories. The book has done so well that a second one, For the Love of Gettysburg, is in the works.
And, according to Rada, proceeds from the original anthology will be donated to such charities as the Gettysburg Area Education Foundation, which supports children’s literacy. Funds will also be used to create a special plaque to be presented to O’Rorke’s as thanks for hosting the group’s weekly meetings each Wednesday at 7 p.m. Sales of the book have also been spurred on by author meet and greets. And, as part of the author experience, group members participated in books signings at the Gettysburg Heritage Center and Museum. For Rizzo and Derwart, the chance to interact with readers was especially rewarding.

Derwart agrees. “I felt like I had finally arrived,” she says. “It made me feel like a real published author.”

That’s because now she is.