The Gettysburg Garden Club cultivates friendship, education, and opportunity in the community

For nearly six decades, members of the Gettysburg Garden Club have been bringing beauty to downtown and connecting those who share a love
of gardening.

More than 60 active Club members share their knowledge of all things botanical with the community in a variety of ways, from fundraising sales to town beautification projects, fulfilling the Club’s purpose: to stimulate in every way interest in gardening and kindred subjects.

The Gettysburg Garden Club is widely known for two beautification projects: planting the flowers in the center of Lincoln Square and leading the Downtown Flower Project.

Members have maintained the Lincoln Square flowerbed since the mid ’60s. In fact, it’s the Club’s longest standing project, says Club President Karen Szoke. The red and white tulips the Club members plant there after a dreary winter are one of the first promising signs of spring. Then, when the threat of frost ends in late May, the Club plants red, white, and blue annuals to honor the heritage of Gettysburg. 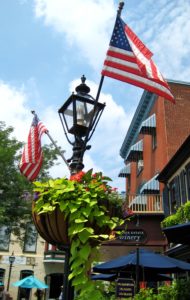 For about 10 years the Club has managed the Downtown Flower Project, which includes 48 hanging baskets and eight planters in the downtown area.

The Club purchases the plants and supplies for the project from Musselman Greenhouses in Orrtanna, who plants the baskets, and pays for the labor of a seasonal worker hired through the Borough of Gettysburg to water the baskets and planters each day, Szoke says.

It’s a community-supported project, with funds raised from private citizens, businesses, and through the Adams County Community Foundation’s Giving Spree event in November, she says.

The project is an immeasurable asset to Gettysburg and its economy, says Borough Council President Susan Naugle. “It’s a wonderful project,” Naugle says. “It just adds so much to the charm of the downtown.”

The planters at the Gettysburg Fire Department are a lesser-known Club beautification project, says Szoke. The Club purchased the 13 planters around the station and maintains them in exchange for hosting its monthly meetings there.

From the Club’s beautification projects to its annual fundraising sales to its monthly gardening programs, the goal is the same: to promote an interest in nature and bring beauty to the community.

“We want to encourage people to use nature and greenery and flowers to make your little corner of the Earth beautiful, pleasant, and pleasing,” Szoke says. “There’s the benefit for flowers and beauty, and that makes us all feel better, it makes us feel good, so those are kind of the byproducts that I see of our projects in town.”

The Club helps make individuals better gardeners, and, in turn, members share those talents with the broader community.

“We have all learned a great deal on an individual basis that we can use in our own garden, and I love learning, so that has been personally very rewarding,” says Club member and former president Carol Heiser. “But what I liked best about the work I did when I was president was I really felt we were making a difference in Gettysburg, that the flowers in the square and the downtown flowers were creating an atmosphere of beauty in our town. Everyone was able to enjoy them because they were for everybody, and I really liked that.”

For Club member and former president Barbara Brand, one of the most rewarding projects was raising funds for the 2013 installation of two Blue Star Memorial Markers. An initiative of the National Garden Club, Inc., these markers are permanent memorials placed throughout the United States to honor men and women in the armed forces, says Brand. A large marker can be found in the park next to the courthouse, while a smaller byway marker can be found in the veterans’ section of Evergreen Cemetery, both on Baltimore Street.

Brand joined the Club in 1995, when she was new to the area and needed guidance on how to beautify her 4-acre property. The Club was a way for her to learn about gardening and make friends. “We worked together on a lot of projects. When you’re working, you chat and you get to know each other really well,” Brand says. “That’s what really endeared me to the organization. I loved it from the get-go, and many of the people that I met all those years ago are still members and my dear friends.”

When Club member Rita Bennett wears her Gettysburg Garden Club T-shirt, she says she hears firsthand how the community appreciates their efforts. “When you run into people, they say thank you so much for the flowers in the square and the hanging baskets,” she says.

Bennett, a former middle school teacher who moved to Gettysburg 12 years ago, serves on the Club’s scholarship committee. The scholarship program began in 1977 with one $150 scholarship. Today, it has grown to three $1,000 scholarships for higher education.

Any Adams County student studying a subject connected to gardening—such as horticulture, agriculture, forestry, conservation, landscape design, or related fields—is eligible and encouraged to apply, says Szoke. The deadline to apply this year is April 15, says Bennett. In all, more than $50,000 in scholarship money will have been given to students when this year’s scholarships are awarded in May, according to Szoke.

The friendships that have been formed through the Club are one of the best benefits of membership. “Some of my best new friends in Gettysburg are a part of the Garden Club,” says Bennett. “There’s a type of camaraderie because we have similar interests.”

Heiser agrees. “I have found when gardeners get together, good things happen. They are nurturing people,” she says. “They learn to take care of plants; they also take care of each other.”

Three $1,000 scholarships will be awarded this spring to Adams County students studying subjects connected to gardening. Scholarship applications are due Monday, April 15 and may be found on the Garden Club’s website at
www.gettysburggardenclub.org.

The Gettysburg Garden Club will host its annual Spring Plant Sale on Saturday, May 18 from 8 a.m. to 2 p.m. at the Gettysburg Fire Department, 35 N. Stratton St. This sale features perennial plants, succulents, and herbs from Club members’ own gardens. Proceeds from the sale will be used to purchase plants for Lincoln Square and to fund the Club’s scholarships for Adams County students.

The Club meets at 1 p.m. the fourth Thursday of each month (except July and August) in the community room of the Gettysburg Fire Department, 35 N. Stratton St. The public is invited to attend the Club’s monthly programs on gardening topics.

Jaime Ridgley is a familar name to Celebrate Gettysburg. You may remember her as our very first editorial director. Now, she helps with editing and is a great source for helping solidify story ideas. Jaime attended the University of Maryland College Park, where she studied journalism and history. Today, she lives in Carroll County, Maryland, with her husband and two children. In her spare time, she enjoys combining her love of history and writing on her blog www.bygonemaryland.com.