Headlines
You are at:Home»Departments»Gardening Guidance»Hey Charlie Brown, Is The Great Pumpkin a Fruit or Vegetable? 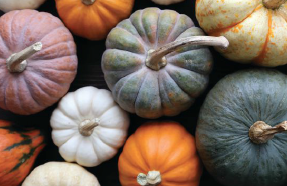 Hey Charlie Brown, Is The Great Pumpkin a Fruit or Vegetable?

Another gardening season is winding down. We are about to mow our lawns for the last time and complete the dreaded task of leaf clean up. Mums and asters are blooming throughout the landscape, and corn stalks and pumpkins adorn our front porches. Pumpkins will also grace thousands of American dinner tables over the next two months as pies or bread.

Exactly what is a pumpkin—a fruit or a vegetable? Pumpkins, like other squash, belong to a group of herbaceous vines called “Cucurbita” and are considered fruits.

The pumpkin has a very long and interesting history. In fact, pumpkins have been used by Native Americans for more than 5,000 years. Pumpkins were referred to as “isquotersquash” by Native Americans, so of course they are native to the Americas and were completely unknown in Europe prior to the 1500s. The French explorer Jacques Cartier reported that he found “gross melons” during his time exploring the St. Lawrence area in 1584.

Native Americans had many uses for the pumpkin; they would dry strips of pumpkin and weave it into mats. Pumpkin strips would also be roasted on open fires and eaten as part of their diet. The seeds were also a source of both food and medicine. Pumpkin seeds were once used for the removal of freckles and for treating snakebites.

Today, we have pumpkins that range in size from less than a pound to more than 1,000 pounds. Pumpkins are not only used for pies, but also soups and bread. Many people roast the seeds and eat them as a snack. Pumpkins are a good source of potassium and vitamin A. Pumpkin seed oil is used by herbalists to treat urinary and bladder irritation. The blossoms are also edible and can be quick fried or eaten raw in salads.

Of course, we cannot discuss pumpkins without the mention of the jack-o-lantern. The tale of the jack-o-lantern dates back to the 5th century in Ireland. Legend has it that the jack-o-lantern got its name from a well-known drunkard and quick tempered, mean old man named Jack. Seems that when Jack was alive, the devil was always appearing to claim his soul on All Hallows’ Eve, or as we know it today, Halloween. Jack was somehow always able to outwit him, but when he died he was deemed too mean to enter heaven.

The devil (who apparently had a resentment against Jack for outwitting him) also refused Jack entry into hell and gave him a piece burning coal and sent him on his way. Jack placed the burning coal in a turnip and used its light to search for his final resting place. Irish tradition became to set a lighted jack-o-lantern on the porch and in windows to welcome deceased love ones home on All Hallows’ Eve. The jack-o-lantern was believed to be a source of protection from evil spirits.

As part of the great immigration in the mid 1800s, the custom of the jack-o-lantern was brought to America but was changed to a hollowed out pumpkin instead of a turnip due to the abundance of pumpkins in America; the coal was also changed to a candle.

The pumpkin is also a wonderful plant to help introduce young people, whether they be children or grandchildren, to the wonder work of gardening. It can be very exciting for children to experience the fast growth of the vine, the blossoms, and, of course, the final product of their own pumpkin for carving or a great pie for holiday dinners.

Steve and Laurie Zimmerman have owned and operated Zimmerman’s Azalea Gardens and Landscaping in Adams County since 1992. Visit their website at  www.zaglandscaping.com.

Steve and Laurie Zimmerman have owned and operated Zimmerman’s Azalea Gardens and Landscaping in Adams County since 1992. Visit their website at http://www.zaglandscaping.com.