Authentic Italian cuisine is something to crow about. Which makes sense at New Oxford’s Gallo Pizza & Italian Restaurant, since “gallo” is Italian for “rooster.”

It also makes sense when you meet the Cucci family—owners Vinnie and Maria, along with daughter Piera. Natives of Sicily, they’ve infused Gallo’s menu with classic Old World recipes and flavors.

“The thing that got me into this business,” says Vinnie, “is my mom had four boys plus my dad in the house. I can remember, growing up, my mom cooked three times a day from scratch. Still does—she’s 85 years old.”

Inspired by his mother, Vinnie started working in restaurants when he was 15, back in Sicily. He came to the U.S. in 1985 and worked at a New Jersey pizza shop, “learning the business” from a cousin.

Gallo is the third restaurant Vinnie, has owned. The family moved to Pennsylvania in 2015 to purchase
Gallo from its previous owner—who was also Sicilian.

“The menu is basically subs, pizza, and dinners—one-third each,” Vinnie says. “We use the best ingredients; I learned that from my cousin. Our dinners are made from scratch, and we make our own sauces from the best tomatoes—you can tell the difference.”

That means dough and sauce are made fresh every morning before the restaurant opens for lunch at 11 a.m.

There’s lots of love for Sicily throughout the menu—including Sicilian-style, square, thick-crust pizza. And the Sicilian Special is topped with the works—pepperoni, sausage, ham, salami, green peppers, mushrooms, extra cheese, onion, and bacon.

Diners can choose from about a dozen specialty combinations atop thin-crust, New York-style pizza. Some of the more unique options include Romana (with prosciutto and mushrooms) and Mediterranean (featuring artichoke hearts, black olives, garlic, capers, mozzarella, and olive oil—hold the sauce). 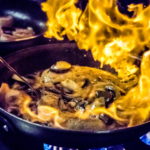 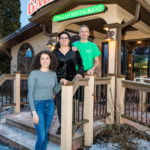 We opted for the colorful and delicious Veggie Pizza, as well as a menu staple—Homestyle Lasagna— still bubbling from the heat of the oven when it arrived at our table.

“Our lasagna is made the same way Sicilians would prepare it,” explains Piera, 24. “Every region of Italy prepares it differently. Sicilian lasagna uses a lot of ricotta—it’s what is most commonly served here [in the U.S.], but most people don’t know that.”

Piera, 24, has spent equal parts of her life in both the U.S. and Sicily. That explains why father and daughter switch fluently back and forth from English to Sicilian in their conversations.

“Sicily is very ancient—we have buildings built in the 1400s that are still standing. Architecturally speaking, it’s very different.
And Sicily is an island surrounded by mountains and water,” says Piera.

Photographs of Sicily grace Gallo’s walls; a row of lemon trees separates the dining areas. Sicily is known for the fragrant citrus fruit. And colorful roosters strut their way into the décor; it was the nickname of the original owner’s father.

Customers Elaine and Mitch Walton of East Berlin visit Gallo at least twice a month because “it’s a great Italian meal for an affordable price,” says Elaine. “I especially like the house salad—it’s full of grilled chicken, bacon, and cheese.”

The couple has even held family birthday celebrations, including Elaine’s 60th, at Gallo.

“I’ve had just about everything on the menu, seriously, and the Pasta Alla Gallo [a house specialty featuring pasta, Bolognese sauce, ricotta, and mozzarella]is probably my favorite,” Mitch says.

Little diners can “Create a Pasta” on the kids’ menu by choosing their favorite noodles and sauce, along with meatballs.

“I wouldn’t waitress anywhere else—they treat me like family,” says Cheyenne Myers of New Chester, one of Gallo’s three servers.

Vinnie’s wife Maria does a little bit of everything at the restaurant, from answering the phone to assisting servers. “I really like to talk with [customers]and get to know them,”
she says.

The couple’s 16-year old son is being initiated into the restaurant business, working once or twice a week.

“It’s wonderful because they’re my family, and I’m so comfortable with them,” says Piera. “Most days, my dad is here all day, 12 hours, so it also takes a lot of dedication and hard work.”