Headlines
You are at:Home»Departments»Frontier Bar B Q

But Chad Farace is a longtime reenactor from a different time period.

“I used to do frontier reenacting,” says Farace. “The Appalachian Mountains were the frontier in the 1700s, and I used to do what was called Mountain Man Rendezvous, where you do living history and cook over fires.”

That’s the root of two of his biggest hobbies—reenacting and the love of a good barbecue.

His hobbies intersected to form Frontier Bar B Q, located at a landmark Adams County intersection—Routes 116 and 16.

The word “frontier” is associated with new boundaries, expanding into new territory. But when Farace founded Frontier Bar B Q 20 years ago, little did he know it would turn into the successful business it is today.

“I never intended to do this full time—I was just looking to do something on the side. But one thing led to another,” says Farace, 57.

He spent his career as owner of a tree-trimming business, but smoking meats and building his barbecue craft were always on the back burner.

Frontier Bar B Q began in a canvas tent with a small smoker one weekend a month, then graduated to a concession trailer. Today, visiting Frontier Bar B Q—open every weekend—is like stepping back in time into a frontier village.

“The theme is old and rustic,” says Farace. “I tried to create a rustic atmosphere, using old barn-style, rough-cut wood—I built everything you see here.”

There’s a large main building, with a sign proclaiming “Howdy Folks,” housing the kitchen and ordering windows. A long open air porch features a live oak countertop where folks can sit to enjoy their meals and look out over the property—including pavilions, picnic tables, and a fire pit. A blacksmith was demonstrating his craft on the day we visited. 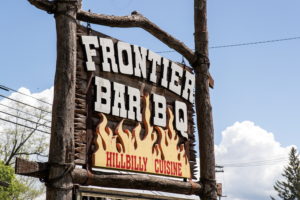 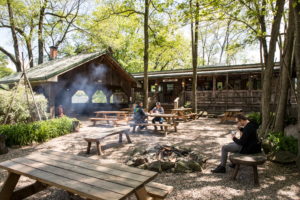 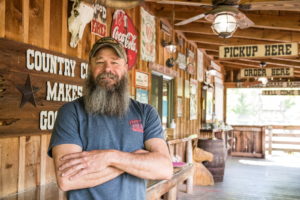 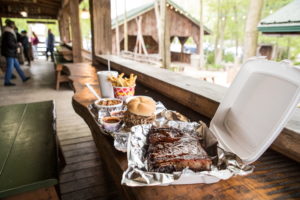 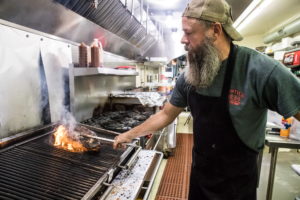 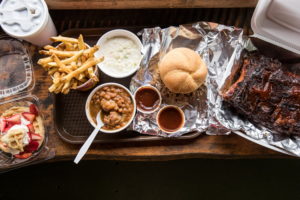 The property sets the scene for the star attraction: the menu.

Four choices of smoked meats await barbecue lovers—pit beef, spicy beef, smoked ham, and Carolina pork—which we tried and it was oh so tender. Speaking of tender, we also sampled the hickory-smoked ribs, and they literally fell right off the bone.

The side dishes don’t exactly play second fiddle. The homemade beans, creamy cole slaw, and cornbread muffins all taste like the tried-and-true classic family picnic recipes that they are. Frontier Fries are genuine old-fashioned potato fries. You can even order a “Hillbilly Sundae” from the country-style menu: That’s a big cup with beans on the bottom, pork in the middle, and a topping of cole slaw.

“It’s not an extensive menu because we found out a long time ago that simple is much better,” says Farace. “We focus on quality and a small menu.”

That small menu is created in huge quantities. Frontier typically sells more than 400 sandwiches every weekend, about 500 pounds of potatoes-turned-fries, cases of cabbage ground into cole slaw, 128 half-chickens every Sunday, and about 100 racks of ribs every day …  and the chicken and ribs almost always sell out.

So how did Farace develop such a knack for barbecue?

“Way before barbecue cooking shows, I went to any barbecue joint that popped up anywhere I went,” says Farace, who was born in North Carolina, one of the biggest barbecue states. So it makes sense that his pork barbecue is a vinegar-based Carolina style.

He regularly visited some of the biggest barbecue competitions around, including Memphis in May and the Jack Daniels Cookoff in Lynchburg, Virginia, meeting people who shared ideas and cooking techniques, he says.

Starting with quality meats cooked “low and slow, over the fire” are the secrets to good barbecue, Farace says.

It takes an entire crew of family and friends, working an entire week, to gear up for weekends.

“My daughter Cortney is my right hand,” says Farace.

“I guess I’ve always been a daddy’s girl,” says Cortney Shaffner. “But my dad is very good at keeping our business and personal relationships separate. He doesn’t give me any special treatment. But as far as working with family—everyone’s family, close-knit and real quick to help each other out.”

Shaffner, who graduated from culinary school at Yorktowne Business Institute, previously worked at longtime Gettysburg landmark The Blue Parrot Bistro, Seasons Bakery, and Ski Liberty’s catering kitchen. Nearly 10 years ago, Frontier had taken off to the point where she was needed full time.

“Even though we’re only open two days a week, we’re here every day but Monday, prepping,” she says. “We make all the rubs for the meats, slice onions, get everything ready, including bulk catering orders.”

One of the dishes Shaffner is personally known for is Nanner Pudding, her mom’s recipe.

“It’s a buttery shortbread cookie bottom, and the pudding is folded together with condensed sweetened milk and Cool Whip, with more crumbled butter cookies on top,” she describes. Talk about comfort food.

“I think it’s ‘Treat everybody like you would like to be treated,’” he says. “It’s great working with family and friends. At the end of the day, everyone is super tired, but we always joke and cut up on each other—we’re happy. We’re all like spokes in the wheel that click together.”

“We typically have a line all day long, but people don’t mind,” he says. “When I see that line start to form … I feel blessed. Down south that’s typical, if it’s a good barbecue joint.”

And he should know.

“I still go to Florida every winter, and I stop at every barbecue joint along the way,” he says with a laugh.

The Next Frontier: The Back Woods

Frontier Bar B Q’s father-daughter team is launching a new venture—an event venue known as The Back Woods. Chad Farace created it right on his family property.

“People like the atmosphere—the rusticness of it—it’s 36 acres surrounded by the Michaux [State Forest],” he says.