Headlines
You are at:Home»Departments»Festival of the Arts

The annual gathering and celebration of art in Frederick, Md., is sure to ignite the creative side in each of us.

From art galleries and pottery shops to music venues and theaters, Downtown Frederick has nurtured the arts for years, celebrating the talents of those who create during the annual Frederick Festival of the Arts, a free juried fine art show presented by the Frederick Arts Council. 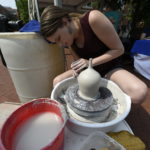 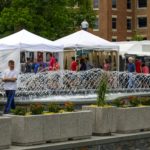 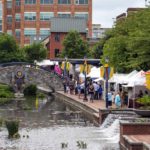 Always held the first full weekend in June, the festival—now in its 27th year—welcomes more than 120 artists from across the country in more than a dozen mediums. The artists and various exhibitions are set up along the city’s beautiful Carroll Creek Linear Park, a mile-and-a-half-long stretch of brick walking paths, water features, pedestrian bridges, and a 350-seat amphitheater for outdoor performances. This creekside celebration also offers live music and dance performances on three stages, artist demonstrations, children’s activities, beer and wine gardens, and an extensive food court that includes healthy local farm-to-table options.

The original festival dates to the ’80s and was conceived to showcase the City of Frederick. Various forms of art, from dance and music to painting and sculpture, were set up throughout the downtown area to show visitors what made Frederick special.

Unfortunately, the plan couldn’t sustain itself, and the festival ceased in 1991. But that wasn’t really the end. “In 1993, a group of Frederick residents revived the festival,” says Jasmine Sneed, executive director of the Festival of the Arts. “We decided to hold the event along the creek, which at that time was an empty stretch with 40 feet of concrete on either side of the water—bare and desolate.”

In those early days, the event was fenced off, and ticketed and expensive tents were provided for the artists. This worked for a time but eventually brought the independently run organization trouble. “We had a challenging time in the early 2000s,” remembers Sneed. “The festival was still ticketed, and we lost a lot of revenue because of three years of torrential rains. Then there was a brief period where the festival was held partially on East Street while the creek was undergoing renovations, and I believe that was the year when there was a 112-degree heat wave. Our finances were stretched.”

In 2008, the festival merged with the Frederick Arts Council, and the decision was made to make the festival a free community event. The renovation of the creek created a backdrop that attracted not only the artists but visitors from around the country.

“The location along the creek is so special,” says Louise Kennelly, executive director of the Frederick Arts Council. “There is an intimacy created that allows the spectators to have a one-on-one experience with the artists, and the feedback we receive from the artists is that they love it.”

The exhibitors are selected by an independent jury and represent a phenomenal range of art, even in their own mediums. Spectators can visit each booth and talk with the creators, learning of their inspiration, techniques, and passion behind their art. “The thing I love most about the festival is the diversity of the art presented,” says Sneed. “There may be 20 jewelers, but there is so much variety in what they create. And the ability to talk directly to each creator is special.”

Throughout the weekend are free demonstrations and hands-on activities for all ages. Back from last year is the Interactive Car Art, supplied by Second Chances Garage, a Frederick nonprofit who helps local families and individuals get back on their feet by accepting donated vehicles. This popular exhibit offers free paints, smocks, and brushes to anyone who wants to put their creative mark on the car supplied by the garage. Last year it was a PT Cruiser.

New for 2020 is a Frederick Artist Showcase booth, which will display and sell the work of the Frederick Arts Council members, and a booth where authors and writers from the Frederick Chapter of Maryland Writers’ Association will share readings, signings, and a children’s picture book activity. There will also be an opportunity to create a marbled silk scarf at the Soft Asylum booth. While there is a fee for this project, participants will walk away with a one-of-a-kind masterpiece that they created.

The festival itself is a destination and brings thousands of visitors to Frederick each year. “We have an art-centric profile, which the festival builds on and shows people what a vibrant arts-oriented community Frederick has,” says Kennelly. “We’ve had artists participate in the festival and then decide to move to Frederick because they love the community so much. So, there is a ripple effect for the economy from visitors to people opening businesses and moving here.”

To learn more about the Frederick Festival of the arts,
visit www.frederickartscouncil.org or the Frederick Arts Council Facebook page.

Frederick Festival of the Arts

*NOTE: “It is our greatest hope that the 27th annual Frederick Festival of the Arts will be able to take place as planned,” says Executive Director Jasmine Sneed. “However, the Frederick Arts Council will continue to monitor the COVID-19 guidelines and will make a final decision by May 7. This update will be shared on the [Frederick Art] Council’s website and Facebook pages.”