Headlines
You are at:Home»Events»Battle of Gettysburg 159th Anniversary on the Ridge

Battle of Gettysburg 159th Anniversary on the Ridge 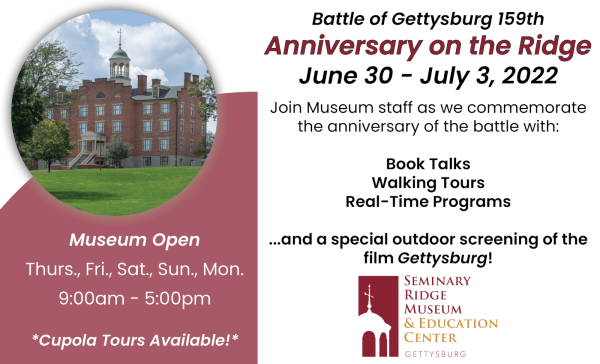 Though initially reluctant to fight at Gettysburg, by July 2, 1863, Robert E. Lee was convinced of a path to victory. Join us on the ground where the Confederate commander gathered his officers at the historic Mary Thompson House (owned by the American Battlefield Trust) to discuss his plans that morning. Meet at Lee’s Headquarters, 401 Buford Ave. (Route 30), 0.2 miles north of Seminary Ridge Museum. Chair recommended.

Established as a United States Army field hospital on the morning of July 1, that evening the Seminary Hospital fell into Confederate hands. Throughout the days that followed, U.S. surgeons and patients found themselves, temporary prisoners of war, amid a raging battle. Learn the stories of these soldiers’ hardships and those who aided them. Approximately 30 minutes. Meet on the west side of the Museum. Chair recommended.

Join historian Chris Bagley, author of the new book, The Horse at Gettysburg: Prepared for the Day of Battle, for an overview of horses’ roles throughout the Gettysburg Campaign. Bagley will discuss the animals’ service, training, human bonds, and sacrifice. Approximately 45 minutes plus Q&A. Meet at Hill-Unger Performance Pavilion, near intersection of Springs Avenue and Seminary Ridge. Chair recommended.

2 p.m. – The Seminary in the Battle (Walking Tour)

Join a guide for a short walk along Seminary Ridge, with an emphasis on the three original structures that still stand on the United Lutheran Seminary campus. Learn about the families and students who lived here when the battle raged across this ground on July 1, 1863, and what they experienced in the days, weeks, and months that followed. Approximately 60 minutes. Meet on the west side of the Museum.

Following the departure of nearly two dozen United States cannons on the evening of July 1, for the remaining two days of the battle, at least 18 Confederate guns occupied the Seminary grounds, as well. Visit an original artillery piece, explore the stories of the soldiers who operated these cannons, and discover the damage to the campus that came as a result. Approximately 60 minutes. Meet on the west side of the Museum.

Discover the sketches, paintings, engravings, photographs, and other art forms that feature the picturesque campus of United Lutheran Seminary. From before the Civil War, through the Battle of Gettysburg, and into modern times, take a visual journey through the past 190 years on the grounds that surround Seminary Ridge Museum and Education Center. Approximately 60 minutes. Meet on the west side of the Museum.