Headlines
You are at:Home»Departments»Artisan»Imaginative Realism

As an artist, Emily Matusz is drawn to the immersive experience of online games.

But her work runs the gamut, from vivid portraits to impressive and expansive public art.

Matusz, a native of Cuyahoga Falls, Ohio, is now based in Gettysburg and thriving as an artist who is building a client base and establishing herself as an emerging talent in the world of fantasy gaming-themed art.

Video games have come a long way from the pixelated graphics of the 1980s. Instead, games are dominated by stunning visuals, fearsome characters, and fantastic worlds. These worlds are the product of game designers’ imagination and truly create an immersive experience for players.

“When I play any game, I like to explore and immerse myself in those worlds,” Matusz says. “It’s like a storybook.”

That unique style of online gaming art colors her work. Whether its the vibrancy of her color choices or the look of her characters, Matusz’ style pays homage to those storybook games. 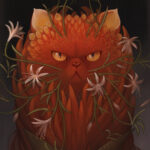 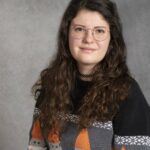 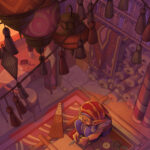 Her artistic signature stands out, whether it’s a mural in downtown Harrisburg or the creation of fantasy gaming characters for private clients. This style of fantasy art follows the technique of imaginative realism, a term popularized in the book How to Paint What Doesn’t Exist by artist James Gurney.

Classical painting, like a still life or landscape, captures what can be seen and recreated. Imaginative realism takes those same classical approaches, but creates things unseen and imagined.

In her work Carpet Weaver’s Workshop, Matusz creates a grandmotherly-looking woman weaving fabric with her hands. Late afternoon light pours down on her studio, illuminating her time-honored craft, but the woman’s pointed ears harken to the imaginative realism technique.

In her piece Flower Cat, Matusz creates a fierce, if not a bit grumpy, looking cat, whose fur morphs into scales and has flowers for whiskers. It’s a mix of things seen—and things imagined.

“For me, it’s a philosophy of reiterating what nature and man-made has given us,” Matusz says. “Nothing comes from scratch, but you can use elements from just about anything to create something that seems new.”

Matusz received her bachelor’s degree in studio art from the University of Akron, near her hometown. The day after she graduated, she moved to Adams County to live with her fiancé.

Studying studio art gave Matusz training in a variety of artistic disciplines, allowing her to explore metal work, sculptures, and classic portraiture. In addition, she has been working in the emerging digital arts field, where two-dimensional, three-dimensional, and animation all come together through a blend of artistic expression and technology.

Despite using a computer tablet instead of a canvas, Matusz still approaches her work with a trained artist’s eye.

“I approach it the same way as I do with an oil painting. I get to know my subjects, I select my colors ahead of time,” she says. “The only difference is I don’t have to smell turpentine, and I don’t have to wait for my paints to dry.”

Matusz most visible work has been murals—including one that hung in the Hanover Lowe’s in 2021 and a permanent one in Harrisburg. Last year, she was approached by Lowe’s to draw a mural as part of its 100 murals program in celebration of the home improvement store’s 100th anniversary.  She paid homage to Hanover by creating a picnic-themed mural.

For her mural at Fourth and Blackberry streets in Harrisburg, she incorporated a Peregrine Falcon, which nests nearby, and mountain laurel, Pennsylvania’s state flower. Her mural, sponsored by Sprocket Mural Works, is part of a beautification program throughout the city.

“A mural really has the opportunity to explore the environment,” Matusz says. “You have a massive canvas. The scale is so large that you can get really impressionistic with your strokes.”

Matusz became acquainted with Megan Caruso, co-founder of Sprocket Mural Works, a nonprofit that has commissioned more than 200 pieces of public art, including murals in Harrisburg and York. Caruso says she’s impressed with the approach that Matusz takes to her art, including the way she plays with light to create depth and shading.

“She shared her artwork, and I thought she had a lot of talent,” Caruso says of Matusz. “We gave her a big wall to work on for her first time as a muralist. I’m excited to see how her work evolves.”

Matusz has always been drawn to the style of art popularized by online fantasy games and multi-player board games like Dungeons and Dragons. Her color selection tends toward vibrant hues; animals are brushed with a touch of whimsy, and her characters created for fantasy games blend animal and human influences.

Matusz has been building a portfolio of work for private clients, focusing on the growing gaming community. Fans will often commission artists to complete portraits of characters they use on gaming platforms.

While Matusz has never played the role-playing game Dungeons and Dragons—considered to be the forerunner of the fantasy gaming community—she still appreciates what the game has meant to the genre.

Her goal is to one day work for a video game company and create the immersive worlds that have captured her imagination and inspired her art.

“I started drawing to create fan art from characters from my favorite video games,” she says. “Since then, I’ve been trying to create my own voice.”

To learn more about Emily Matusz and her art, visit www.majikarpette.art