Bill Wickham is an artist, a reenactor, and a historian. He’s also a humorous, humble man who possesses a dogged eye for detail, an eternal student who never lost his boyhood curiosity. Wickham sees reproduction hats as a perfect vehicle to channel the emotions, thoughts, and experiences from moments in our country’s past into the present.

Stepping into his shop is akin to seeing annals of history laid out on glass shelves and wooden hat stands in colorful felt, fabric, and feather form. “When customers enter my shop, I love to hear them say ‘Wow!’ I love it even more when they ask questions,” he confesses. It’s no surprise that Dirty Billy’s Hats is a beloved local institution. 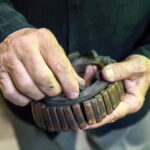 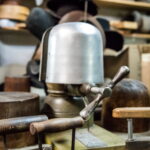 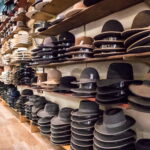 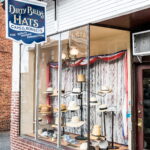 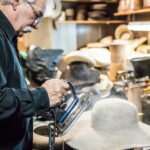 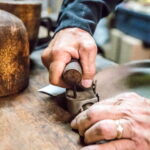 Wickham has earned his reputation as a wealth of information on reproduction headgear. He has a storyteller’s presence and a talent for bringing alive mountains of colorful anecdotes in a way that sticks in your mind and moves you—all in the context of hats. That keen eye for extracting significance from even minor details and passion for sharing history is infectious and enlightening.

His connection to the past runs deep, starting with his roots just south of the Mason-Dixon line in Frederick, Maryland. He grew up in what he calls “the very epicenter of it all—Harpers Ferry, Monocacy battlefield, Antietam battlefield, and Gettysburg battlefield.” His grandfather let him rummage through an attic “treasure trove,” and his grandmother encouraged him to take odd jobs that paid in relics and stories.
“I guess I was the luckiest kid,” Wickham mused. “I got lots of stuff.”

Hooked after his visit to the Battle of Antietam Centennial in 1962, he became a full-fledged Civil War reenactor soon after. Eventually, his grandmother got tired of repairing 100-year-old caps for him to wear out and taught him to reverse engineer their construction for reproduction. He progressed on to “hats and uniforms, accoutrements and footwear, but always ultimately returned to headwear,” he says.

By 1981, Wickham had garnered the nickname “Dirty Billy” from the perennial dust-covered state of his reenacting garb and began selling museum-quality hats full time. He discovered his artistic niche, a business was born, and he found an outlet for his passion through what he calls “a wonderful escape into the past.”

Wickham has created countless reproduction headwear for various customers, including films, plays, collectors, reenactors, and hobbyists.
“I started making Civil War Federal forage caps at age 14, and I’m about to turn 72,” he says. “In 1980, I started counting them.
To date, I’ve made more than 14,000.
I can’t say how many I’ve made of anything else, but enough to make them without a pattern to size.” Impressive, to say the least.

“In reproduction, you … come to understand the thinking of the period and build a picture in your mind of why we went to war, which goes far beyond answering the why of a type of stitch or a certain shape,” he explains. “You come to understand the evolution of a nation and how we are an aggregate of all of our past and our ancestors from all over the world.”

Wickham truly believes understanding our past can help us solve today’s problems.
“Our ancestors faced the same problems we now face,” he says. “Knowing how they dealt with their problems teaches us how to move forward.”

His shop stocks headgear spanning almost 400 years, from the 17th to the early 20th century.  Wickham’s co-owner and spouse, Fran, also “caught the hat bug” and continually impresses him with her skills, insight, and knowledge. “She has become quite an indispensable and very savvy businesswoman of whom I’m so proud,” he shares.

His creative methods are quite organic. “I don’t have to design hats … I become a hatmaker of that period. … So when you get your hat, cap, or bonnet from me, the flavor of the time is captured. This lets a person transcend time.” Anyone lucky enough to own one of his hats knows firsthand his work speaks for itself and stands up to historical scrutiny.

Wickham always asks himself questions before reproducing a hat. “What was the function? And why that shape? How did it evolve? What did its predecessors look like?” Answers to these questions shape his creative process and add realism to the final results.

His imagination allows him to time travel each time he sits down at his bench to create, absorbing nuanced wisdom from the journey. Behind the intricate, painstakingly researched fruits of his labor is an avidly curious historian with a deep appreciation of our country’s history and a timeless vision for its future.

Ask Wickham what his workroom looks like and you’ll get a humorously satisfying answer. He describes it as “Dante’s Twelve Circles of Hell in its confusion,” but he knows his way around it. Wickham’s work isn’t without challenges, but it’s easy to see he enjoys it all.

“What inspires me sometimes are dreams, paintings, what I’ve read, and, of course, historical items … I sometimes get peace and sometimes get frustrated … In trying to recreate a hat from another time, mentally, I get to go there.
You learn about so much more than just hats. It’s unavoidable.”

Wickham’s “artifacts you can wear” are more complex than reproduction headgear designed to “protect, show rank, or attract.” For him, hats and their histories have been such a constant in his life, he even dreams about them.

“I love my work. I work every day because I love it. I dream of hats and hat making and of so many time periods. In fact, while making caps at home, I like to put on historical documentaries and films for background noise,” he shares. “Sometimes I fall asleep, and my mind continues absorbing. You wouldn’t believe some of the dreams I have.”

To see Bill Wickham’s dreams in real life, make a trip to Dirty Billy’s Hats at
20 Baltimore St., Gettysburg, open Friday to Sunday from 10 a.m. to 6 p.m. Visit www.dirtybillyshats.com, follow the shop on Facebook, or call 717-334-3200 for more information.

Hannah Hottenstein is an experienced technical writer specializing in content about emerging tech, personal finance, entrepreneurship, and psychology. She’s also a small business owner, a classically trained artist, an avid home cook and recipe tester, a gadget enthusiast, and an ardent AI lover. After living in Colorado for 3 years, she has recently returned to Adams County to set down new roots.