Headlines
You are at:Home»Departments»The Cake Bar

You don’t have to rise at the crack of dawn to run a successful bakery. Amanda Wiles, co-owner of The Cake Bar in downtown Hanover, is living proof of that. The shop is open Tuesday through Saturday, mid-afternoon through 9 p.m. during the week and 10 p.m. on Fridays and Saturdays.

“It’s modeled off big city dessert bars, which are open during the evening when we typically eat dessert,” explains Wiles. “Plus, I hate mornings—I’m not an early morning person,” she says with a laugh.

Wiles, 36, opened the sweet spot in April 2018 with her business partner, co-owner Jeremy Schaffner, also 36. If their names are familiar, perhaps it’s because you’ve eaten at their previous restaurants, Gettysburg’s former Seasons Bakery and SCCAP Café.

The Cake Bar’s menu features eight to 10 cake flavors on any given day, including seasonal favorites and traditional flavors—available as whole cakes or by the slice—plus jumbo cupcakes and cookies. Custom-order cakes and cupcakes are available for birthdays, weddings, and other special occasions. 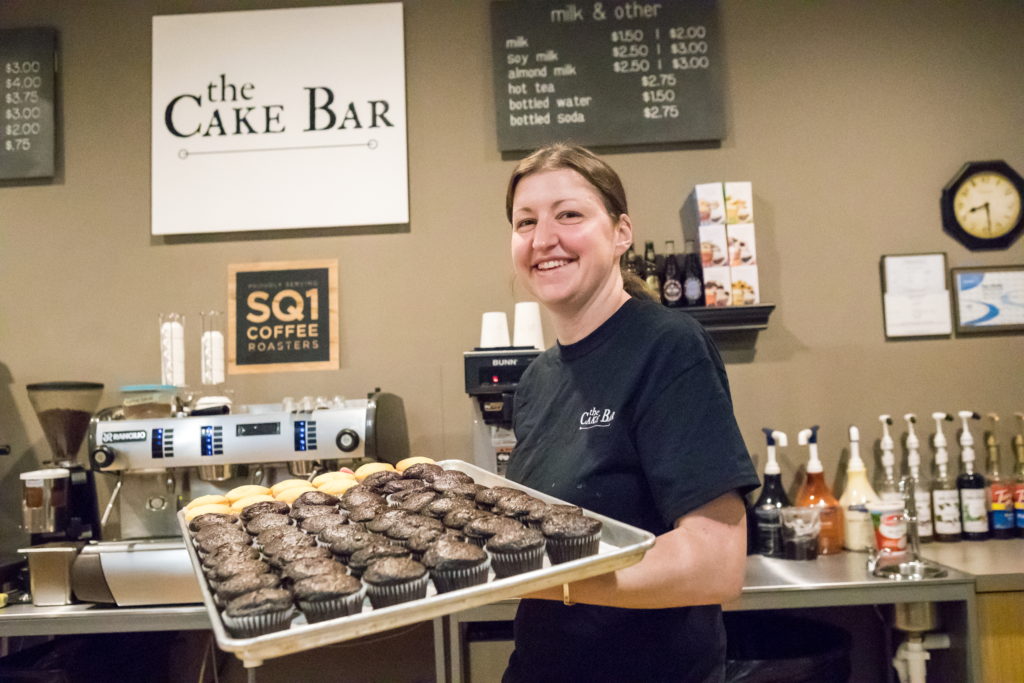 “People are happy to have another option besides the grocery store,” Wiles says. “We make everything from scratch, and people appreciate that.”

With a name like Chocolate Decadence Cake, it’s no wonder it’s one of The Cake Bar’s top sellers. A three-layer chocolate cake, it’s interspersed with chocolate mousse and covered in chocolate ganache—all featuring Hershey’s chocolate. The Peanut Butter Lovers’ Cake is also popular—balancing chocolate cake layers with peanut
butter mousse and vanilla buttercream icing. Both cakes are flavorful and not overly sweet.

“I was 14 when I got my first job in a commercial bakery at the Dutch Country Restaurant,” says Wiles, who was born, raised, and still lives in Hanover. “All our cakes come from recipes I’ve collected through the years, and Grandma’s Fudge Cake comes from the lady who used to own the Dutch Country.”

Pumpkin also brings back special memories for Wiles. She recalls fond memories of baking with her grandmother when she was little—especially pumpkin rolls. Today, Wiles says her grandmother is “definitely my biggest fan. She tells everyone that she gave me my start in baking.” 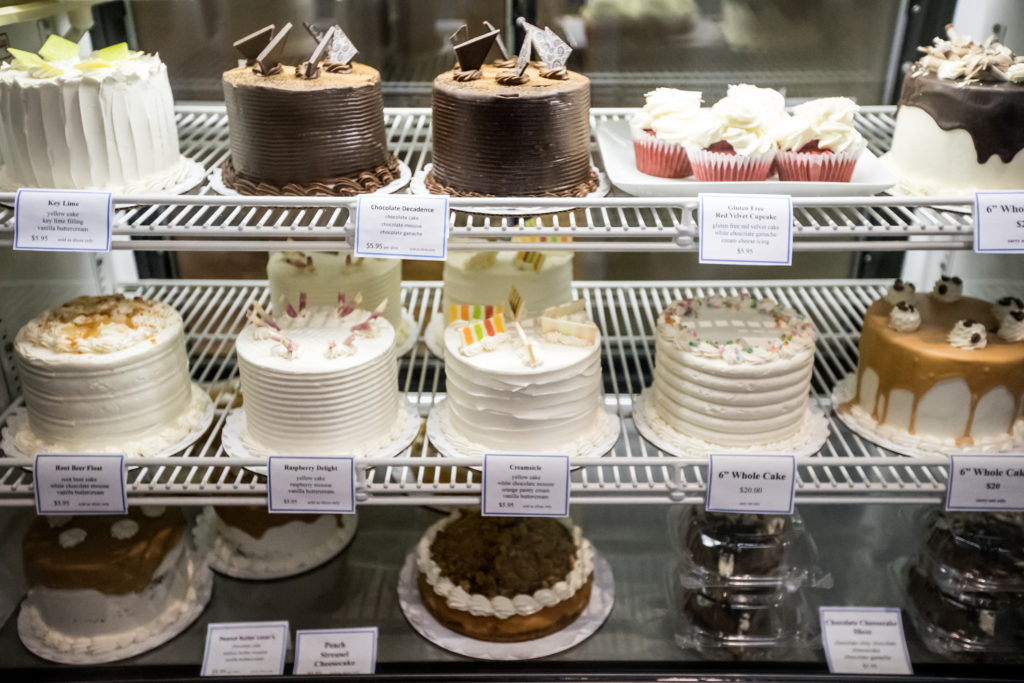 The Cake Bar also includes a coffee bar, serving Lancaster’s Square One Coffee, espresso, and cappuccino, but Wiles says a big frosted mug of milk is one of the most popular beverages.

The building at 22 Carlisle St., about a block from the square, was the original site of Hanover’s Bon-Ton store. After it burned down, it was rebuilt as a bank. Today, in addition to The Cake Bar, the grand façade houses a number of businesses including an arcade and a performing arts group.

If you look closely, the largest table inside The Cake Bar’s cozy seating area contains insets that once held bank slips. Schaffner, who’s a full-time culinary instructor at Adams County Tech Prep, enlisted students to construct a new tabletop that resembles marble; students also constructed the shop’s menu boards and printed logo-bearing shirts. Paintings displayed in the space (and for sale) are created by Schaffner as a hobby in iconic Bob Ross-style.

Since he teaches full-time during the week, Schaffner often works The Cake Bar’s register on Saturdays when the shop is open from noon to 10 p.m.

Wiles says Hanover’s business climate is up and coming. “There’s a lot more nightlife, two breweries within a block of us and more shops opening,” she says. “Growing up here, it’s especially rewarding to see.”

Jody Wolf of Hanover is a regular customer, stopping in once or twice a month. She describes the Chocolate Decadence Cake as “chocolate heaven. It’s very good, dense, with a creamy chocolate icing. I was so excited when I heard this shop was coming to downtown Hanover—I couldn’t wait for it to open,” she says.

Wiles plans on operating The Cake Bar for years to come. “It’s my calling,” she says, “I love doing it.”