Headlines
You are at:Home»Departments»Eighty Two Café

Pouring 110% into Every Cup of Coffee

Alex Lemon grew up with a childhood tradition of drinking coffee with her mom on Sunday mornings. It was such a cherished time that it pulled her back home to Dillsburg from West Chester University during her college days, so that their mother-daughter coffee rituals could continue.

Little did she know then that she was just a few years away from becoming co-owner of a highly successful Gettysburg coffeehouse and roasting company—Eighty Two Café and Ragged Edge Roasting Co.—housed together under one roof at 82 Steinwehr Ave. 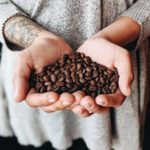 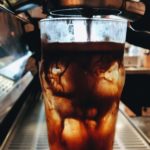 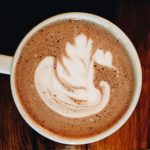 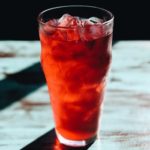 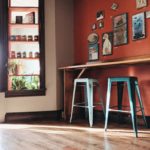 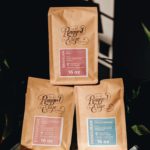 Lemon was a student at HACC-Gettysburg when she met Chad Close, who worked for about a year as a barista at the Ragged Edge’s on-campus location. Close had grown up with Jake Schindel, owner of Gettysburg’s Ragged Edge Coffee House on Chambersburg Street. And Close had just graduated from the University of Washington in Seattle, a hotbed of entrepreneurial coffee roasters. He logged many hours writing college papers—and caffeinating.

Close wanted to take a little time off after graduation before continuing on to law school. So, he returned home (he’s originally from nearby Keymar, Md.) and—influenced and intrigued by Seattle’s coffee scene—started working for Schindel.

His coffee blends were so well-received that his hobby quickly percolated into a small business venture. By this time, Close and Lemon were a couple, then business partners. That tiny 1-pound roaster gave way to a small roaster, then a commercial roaster. The Ragged Edge Roasting Co. was established in 2014 and began picking up clients like local grocery chain Kennie’s Market.

Meanwhile, Lemon earned her degree in graphic design and began working for the Gettysburg marketing and printing company, Graphcom. She left after two years to focus full time on the growing coffee venture—which built on her creative skills.

“Graphic design skills translate into owning a business because it’s a creative venture—you have to be able to think outside the box when you own a business,” Lemon says. “Graphic design is looking at any problem and coming up with a solution.”

Eighty Two Café opened its doors in 2016 with the goal of “showcasing the coffee we roast,” Lemon says.

It’s anything but the same old grind at Eighty Two. Every cup of coffee is ground and brewed fresh, seconds after each customer orders. And the coffee beans were likely roasted that very morning.

“People are impressed with that—it’s not pre-brewed, sitting in an urn all day,” Lemon says.

At any given time, their Ragged Edge Brewing Co. has 10 to 15 types of coffee available, from Honduran, with milk chocolate undertones, to bright and acidic Ethiopian, robust Guatemalan, and Costa Rican with flowery notes.

“I compare it to wine tasting—different types of coffee beans are similar [to grapes]in how they act—some are sweeter or acidic. It depends on the soil, but coffee grows best along the equator,” Lemon says.

In addition to a great cup of joe, the coffee menu includes coffeehouse staples such as an Americano, Latte, Cappuccino, and Cold Brew. As delicious as they are, the seasonal coffee menu is infused with Lemon’s exceptional creative touches.

“I like to look at seasonal dessert and fruits and berries for inspiration,” Lemon explains.

When the COVID-19 pandemic hit, Eighty Two was one of the first area restaurants to transition to curbside service.

“One of our customers, who is now a friend, said, ‘Necessity is the mother of invention,’ and she’s right,” Lemon says. “As soon as we saw what was happening in Italy, we hopped on curbside pickup, set it up through the website, and soon after that Pennsylvania shut down.”

Perhaps someone with the last name of Lemon is naturally able to transform trouble into something sweet, like lemonade—or, more accurately, lattes.

“Putting our lattes into milk jugs, ‘The Big Jug,’ is my favorite idea I’ve ever had,” Lemon says. It’s a 64-ounce jug of Eighty Two’s delicious caffeinated concoction that can go straight from the coffeehouse into customers’ home refrigerators. She brewed up the idea during the pandemic, but it’s a product that is going to stay in the mix.

Today, Close and Lemon are co-owners of both Eighty Two Café and Ragged Edge Roasting Co.; they bought Schindel out after a year in partnership.

“We adore Ragged Edge—there’s no bad blood,” Lemon says. “But it’s sometimes confusing to be Ragged Edge Roasting Co. because we are not affiliated with Ragged Edge anymore. I’m thinking of renaming and rebranding the roasting company and coffeehouse in the near future, so that both have the same name and same personality.”

She’d like the new branding to pay homage to the coffee farmers whose agricultural product makes a great cup of coffee possible.

As for the future amid the pandemic, she feels fortunate to be involved in a small business focused on a product—coffee—that many consider essential to their existence.

“I’m very proud of our presence in the area,” Lemon says. “Chad roasts all the coffee; I package, label, and personally deliver all the coffee—it feels very hometowny, and those good relationships you build with a good product are what make a business successful.”